A US Navy officer has been sentenced to four years in a prison for scamming the federal government out of $2.7 million, money which he used in part to fund a high-stakes poker lifestyle. 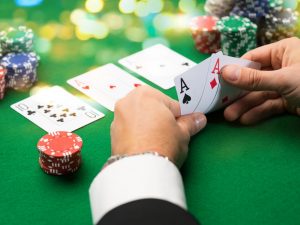 In addition to using the cash to apparently take part in some sizable poker games, Lt. Randolph Prince also spent liberally in other areas – buying luxury cars and a second home with his embezzled gains.

Prince enlisted in the Navy at 18-years old, serving for 27 years and winning a promotion to lieutenant in 2012.

“When his time in service is remembered, it won’t be for the fact that he rose from the lowest enlisted ranks to the grade of Lieutenant,” his attorney Shawn Cline told the Virginian Pilot Newspaper. ”It will be the events of this sentencing hearing that are his legacy.”

So how exactly did Prince pull off a heist which saw him steal nearly three million from the federal government?

According to the Department of Justice (DoJ), as part of Prince’s job with the Explosive Ordnance Disposal Training and Evaluation Unit 2, he had authorization to order supply contracts. Only instead of having equipment shipped to his unit or legitimate companies, Prince ordered the supplies through fake companies set up by he and two accomplices.

He would sign off as if the products had been received and then pocket the cash.

A High Stakes Nobody?

Despite the fact that Prince is believed to have used some of the money to play in high stakes poker games, there is no trace of him making any impact, or even appearances, on the poker scene.

He certainly wasn’t slinging chips around in any of Triton Poker’s nosebleed cash games in the past year.

The Hendon Mob database also shows no record of Prince taking part in any poker tournaments over the years. And a search through various poker forums reveals no references whatsoever to Prince playing poker.

It’s unlikely he was playing high stakes poker with fellow military personnel, so despite the poker references made in court, there’s no indication of the stakes or locations of the games Prince was purportedly taking part in.

Whatever the case, we shouldn’t be surprised that a military man would find himself caught up in the game of poker – the two fields have long been associated with one another.

Mike Sexton made similar references when he spoke to military personnel in 2016.

“I definitely think there’s a carry-over to military, and to life in general, when it comes to taking chances,” said Sexton.

As for Prince, in addition to four years behind bars, he’s been ordered to pay back thr $2.7 million he stole.

Here’s one of my fav’s again, he is respected for anything related to poker.
Meanwhile , this just proves we have corruption in our military and anywhere people have the authority to do the banking/books and they are getting very clever with their methods of stealing !
We just can’t have honesty all the time.

The details about his time served and rank dont make any sense. 2nd lieutenant is the first rank of officer and 1st lieutenant is the second officer rank. It doesnt make sense that he would have served 20 years before being promoted for the first time.