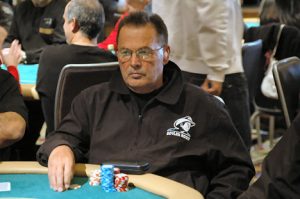 Poker legend Dewey Tomko says he did NOT write the article in The Press of Atlantic City, so who did? (Image: flipchip / LasVegasVegas.com)

An article that appeared in The Press of Atlantic City, purportedly written by poker legend Dewey Tomko and one Bill Byers, entitled “Poker Pros: Test Gambling Sites for Cheating” is a fraud. The article, which had a  largely anti-online poker slant, was discredited when three-time bracelet winner and two-time WSOP Main Event runner-up Tomko claimed he did not write it and had no knowledge of its authorship.

“It’s not surprising that recent comments by casino giant Steve Wynn on his hesitancy to embrace Internet gambling caused a stir, especially his worry about ‘the potential for an industry-blackening moment if an underage scandal were to occur,’ ” began the article. “But what may be surprising to some is that we – as long-time professional poker players with a deep respect for the game – share Wynn’s apprehensions.”

It certainly was surprising to some, including Nolan Dalla. Dalla is a poker writer, journalist, casino executive, media director of the World Series of Poker and an all-round stand-up guy who has been around the poker scene for decades, and he smelled a rat, simply not recognizing the voice of his old pal, Dewey.

“How can they say that about me?”

A quick phone call confirmed Dalla’s suspicions. Tomko expressed his disbelief and had the following to say: “I’m totally in favor of online poker. I haven’t played it. But I know it’s good for poker. I can’t really comment at all about security because I’m not qualified in that area. How could I be? How can they say that about me? I would never write such a thing about online poker. I would never do anything to hurt the game. You know that.”

The piece itself, while at one point claiming glibly to be “fully support[ing] the legalization of Internet poker,” uses much of the rhetorical arguments of the Sheldon Adelson brigade, and appears to be an attempt to subvert the pro-online poker cause by claiming to be written by poker pros.

“An ad by the Coalition to Stop Internet Gambling features a letter from the FBI to Congress expressing concern about Internet gambling being used for criminal or terrorist financing,” burbles the article. “Apparently, criminals can use technology that poker websites cannot detect to hide both the identity and location of a poker player, enabling the corruption of virtual poker tables. Background information related to the FBI concerns suggests that the technology enables multi-player collusion. If criminals can do this, so can cheaters. Perhaps they already are.”

So Who’s Behind the Hoax?

But who did write this technophobic diatribe? Tomko admitted knowing the supposed co-author, Bill Byers, a “poker pro” who appears to have given up playing tournaments in 2004 after little success, but Tomko said he had not spoken to this man in ten years. He suggested that a certain Jamie Thackston might be involved, a software security consultant who had an axe to grind about online poker and who was working with Byers – a man Tomko had met for a meeting and said he liked.

A new update from Dalla’s blog as, we write this, reveals that Thackston is indeed the man behind the piece. In telephone conversation with Dalla, Thackston admitted Tomko never saw, nor approved the final draft, but claimed that he had discussed the piece with Tomko during a meeting, an assertion Tomko denies.

A statement from Tomko’s attorney read: “Please be advised that Mr. Tomko did not write or approve the editorial described above. Mr. Tomko requests that The Press of Atlantic City remove this editorial from its online edition … IMMEDIATELY.”

At the time of writing, the piece was still on the The Press of Atlantic City‘s website. We suggest you follow Nolan Dalla’s blog  for updates.