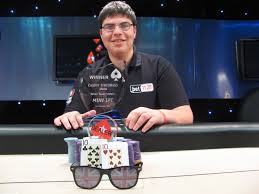 Mustapha Kanit won big in an EPT Super High Roller this weekend, but has long been a force on the tournament circuit. (Image: PokerStars)

Mustapha Kanit has long been one of the top Italian poker players, with plenty of big cashes over the course of his career.

But he never had that signature victory that could bring him into the spotlight worldwide, at least until this past weekend.

The victory made Kanit the winningest tournament poker player in Italy’s history, and brought his live tournament earnings to more than $3.7 million.

Kanit had plenty of work to do in order to claim that prize, however, as the Super High Roller featured a typically tough field that included several of the world’s best players.

Only nine would be paid, and there wasn’t a lot to separate players on the bubble, though eventually Vladimir Troyanovskiy was dropped in 10th place.

AT the final table, Kanit may have been relieved to see Global Poker Index leader Scott Seiver eliminated in 9th place. The result earned Seiver another €92,860 ($103,300), and should help him extend his lead slightly in the GPI rankings.

There was still plenty of other talent to deal with at the final table, however. There were three tough Germans at the table including Martin Finger and Fabian Quoss, and Argentina’s Ivan Luca was in the mix as well.

However, Luca would go out in 8th, while the Germans stayed in until the final five before Quoss, Fedor Holz and Finger went out in 5th, 4th and 3rd respectively. That left Kanit heads up against Canada’s Mike Watson for the title.

Watson began the heads-up portion of the tournament with a chip lead, but an early double-up from Kanit gave the Italian the advantage. Kanit continued to press his edge until he was able to build a dominating chip position from which Watson survived one all-in clash, but was clearly on borrowed time.

On the final hand, the money went in before the flop with Kanit holding K♣7♥, dominating the K♦5♣ of Watson. When two sevens hit on the flop, it was clear that Kanit was in complete control; while the turn brought a straight draw for Watson, no help came on the river, making Kanit the champion.

Kanit Has History of Tournament Success

For Kanit, the win marked the high point so far in his career. It was by far his biggest cash ever, and marks the most notable live tournament victory of his career as well.

However, Kanit is no stranger to doing well against serious competition. He has scored several big cashes in his tournament career, including wins on the Italian Poker Tour and three final table appearances at last summer’s World Series of Poker.

Those results have made Kanit one of the world’s highest ranked poker players, as he currently stands 29th in the GPI rankings.

He is also well-known for his Internet poker exploits: He is ranked 87th in the PocketFives online rankings, and reportedly has over $2.8 million in online earnings.