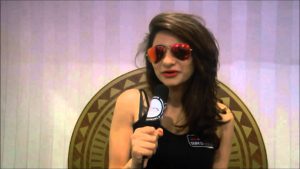 India’s Muskan Sethi is helping to redefine the position of women in poker according to a recent article. (Image: YouTube.com)

Muskan Sethi is helping to change the face of poker in India according to a recent article by India Today.

Sethi, who worked as a social worker in between playing poker, might have just $15,667 in live tournament earnings, but her growing presence in the industry is helping to break down barriers.

Although poker is still a relatively niche activity in India, the majority of players are men.

Being a traditionally patriarchal society, most social activities are dominated by males.

Poker has proven to be no exception over the last few years with the likes of Aditya Agarwal and Abhishek Goindi making names for themselves on the international circuit.

In fact, in response to the growing popularity of poker in India, PokerStars actually signed Agarwal to a sponsorship deal alongside Japan’s Kosei Ichinose back in 2015. Unfortunately, among this wave of Indian stars breaking through, there have been very few women.

According to India Today, however, Sethi is helping to change that. Picking up her achievements in the game so far, the news and lifestyle publication decided to tell her story. Branding her as “India’s first professional poker player,” the national website interviewed Sethi about her career.

Like most stories of this nature, Sethi talks about a youth spent watching poker on TV with her father. Although she hated it at the time, this exposure to the game would eventually lead her into the world of Facebook poker.

After learning the basics of the game for play money, Sethi won a PokerStars’ competition to play against the pros in Barcelona. From there she managed to cash in various tournaments around the world and the rest, as they say, is history.

A Familiar Story with New Consequences

While this Moneymaker-esque story won’t be anything new to those of us already in the poker industry, it may be a surprise to readers in India. Given the emergent nature of poker and the fact Sethi is starting to gain some recognition despite being a woman, the story is one that could have an impact in India.

As the industry looks to different countries for new ways to grow, India is often seen as one of the most attractive propositions. With a population of 1.25 billion and a relatively liberal attitude towards poker, it’s been touted as the next big market to crack along with China.

However, for the industry to really take off in a country like India, it needs women to engage with the game. This means that players like Sethi could soon become hugely important figures.

In fact, although it might be a simple interview on a single website, Sethi’s story appears to have already captured the media’s attention. If this is the case, then she may be “breaking stereotypes” as the article claims and, more importantly, helping to make poker in India a much bigger deal.