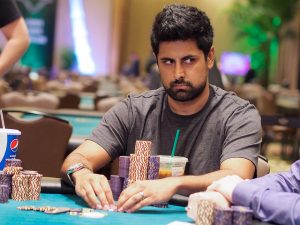 Mukul Pahuja was already one of the top poker players in the world, and now the young American has added yet another title to his belt. This time, Pahuja took down a World Series of Poker Circuit event in West Palm Beach, Florida late last week.

63 players in total were paid. A min-cash was good for $3,007, nearly twice the buy-in. But the real story is the winner. The most accomplished player in the field came out on top.

No word from FanDuel executive Matt King, who recently came out publicly saying poker was a game of luck, not skill, on how the most successful player in the event won. Oh, and this is the third time Pahuja has won a WSOP Circuit ring to boot.

When the final table began, Lowing was the chip leader with just under 3,000,000 in chips. Pahuja had less than half the size of Lowing’s stack. But it was Pahuja who dominated the final table, earning the circuit ring. Just lucky, right? Not so much.

Winning isn’t something new to Mukul Pahuja. He’s previously been successful in both World Series of Poker and World Poker Tour events. In fact, he was the WPT Season 12 Player of the Year.

Since 2013, Pahuja has cashed in 11 WPT events. That includes two just since December. And he has many significant cashes mixed in there, not just min-cashes.

He finished 10th at Choctaw in Oklahoma back in July, 3rd at an event in Montreal in 2014, and also finished 2nd, 4th, and 8th place during the same calendar year in WPT tournaments.

No Stranger to Success

The WPT isn’t the only place Pahuja has had success at the poker table. His victory in Florida was his third career WSOP Circuit ring. Although impressive, he still needs to win five more in order to catch Alexandru Masek’s record eight rings.

In total, Pahuja has nearly $4.4 million in career live tournament poker winnings. The New York native ranks 9th all-time on his home state’s money list. But he still has a long way to go in order to catch Erik Seidel’s $26.5 million mark.

Scott Seiver, Vanessa Selbst, and Andrew Lichtenberger also rank above Pahuja on New York’s money list. Pahuja has yet to win a WSOP bracelet, but he does have 15 career cashes at the world’s most popular annual poker series.

To be fair, Mukul did get lucky early on at the final table before he won the tournament. When we were seven handed he got it all in preflop with jacks vs kings and spiked a jack on the flop. Other than that bit of luck his play was phenomenal and his victory was well deserved.