British poker pro John Hesp is to have a movie made about his exploits at the 2017 World Series of Poker (WSOP). 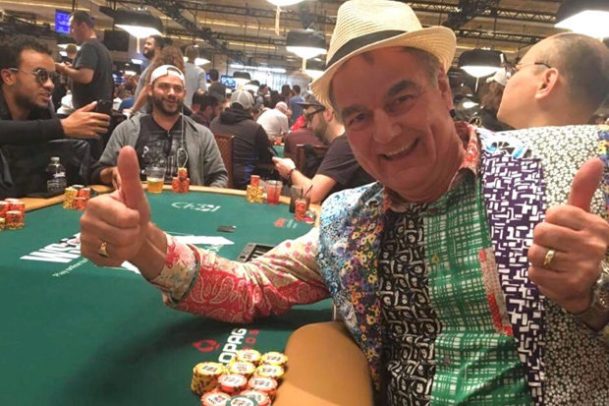 British poker player John Hesp is to have his fairytale WSOP run made into a movie. (Image: Press Association/Daily Star)

Appearing at Napoleons Casino in Hull for his first tournament since finishing 4th in the $10,000 WSOP Main Event, Hesp told the local newspaper that he’s in talks about a movie. Prior to winning $2.6 million at the WSOP in Las Vegas, Hesp’s biggest live win was inside his local card room at Napoleons.

Upon his return to the casino on the weekend of September 2, Hesp was presented with a special chair designed to match the garish outfits he became known for during his Main Event run.

During the special evening, Hesp told the Hull Daily Mail’s Alex Grove that he’s close to finalizing a deal that will tell his poker story.

“I got contacted by two or three producers when I was out in Vegas, including some Hollywood names, but I elected to go with a UK based company,” Hesp told the local paper.

With the deal “90 percent” complete and Hesp’s lawyers looking at the finer details of the contract, Hesp is hoping his story can provide some “feel good” inspiration for viewers. Despite being a poker fan for a number of years, Hesp entered the $10,000 Main Event on something of a whim.

Calling it one of his “bucket list” adventures, Hesp proved that you don’t have to be play with a stoic demeanor and stern attitude to do well at the WSOP.

The Fun Face of Poker

Much like Chris Moneymaker did back in 2002, Hesp played with a naïve fearlessness that allowed him to have fun as the tournament progressed.

His affable nature and natty fashion sense eventually caught the attention of the poker community as well as the media at large. His story has since been told around the world by outlets as diverse at the Hull Daily Mail, the BBC and USA Today.

Although the 64-year-old amateur couldn’t pull off a “full Moneymaker” and win the Main Event, his 4th place finish was certainly an example of the American (or British as they case may be) dream.

This fairytale story combined with Hesp’s ability to show that poker can be entertaining is something that captures the current zeitgeist in poker and, unsurprisingly, is appealing to movie producers.

Details of when the movie will be made are still up in the air, but Hesp has already made it clear that if he’s got a hand in the casting then he’d like George Clooney to play the lead role.

to wait for this movie .. I have always liked the movies about poker … they are very interesting