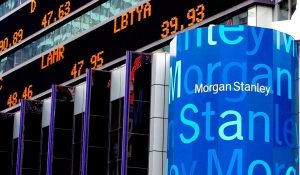 Gaming analyst Morgan Stanley has downgraded its predictions for the US online gambling industry in half, from its previous $5 billion in 2020 down to $2.7 billion. (Image: Getty)

We wish it was an April Fools joke, but alas, no such luck. Financial services analysts at Morgan Stanley have cut their valuation of the potential of the US online gaming market by almost half.

The revised forecast values the market at $2.7 billion by 2020, down from the $5 billion it predicted in late September 2014. The firm cited several reasons for the reevaluation, from payment processing and geolocation problems, to a lack of effective marketing and the continued strength of the offshore market.

Morgan Stanley initially predicted that the first three states to regulate online gambling, Nevada, Delaware and New Jersey, would garner a combined $678 million in their first year, but results have been underwhelming, with just $135 million generated over the first 12 months of operations.

“We continue to believe that there is a material runway for growth, but results have been disappointing,” the firm said. “Legislative processes continue to be slow as lawmakers remain unconvinced that online gaming is currently worth the hassle for limited tax revenue.”

The analysts said they did not foresee any other states opting to regulate in 2015, although they expect California, Pennsylvania, New York, and Illinois to do so during the next few years, and predict that 15 states will have legalized online gambling by 2020.

Last year, Morgan Stanley estimated that 20 state jurisdictions would have been created by that date.

The company also said it was not overly concerned by the threat the industry faces from the Restoration of America’s Wire Act (RAWA), the bill that seeks to prohibit online gaming at a federal level, which received a Congressional hearing last week.

“We believe a federal ban of online gaming is unlikely given legislators’ split views,” the company said in a statement. “However, a recent hearing in a House Judiciary subcommittee on [U.S. Rep.] Jason Chaffetz’s proposal for a ban suggests it could be gaining momentum. While the bill may advance out of committee, we believe it faces long odds of passing, especially without carve-outs for online lotteries and existing online gaming states.”

Land-Based Poker Also Down in Nevada

And it’s not just online gambling that has taken a hit this week. 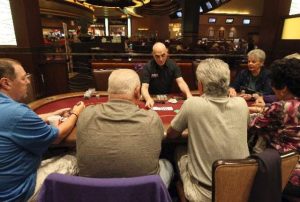 More than a dozen Las Vegas poker rooms have shut down of late, and the revenue numbers for Sin City reflect that. (Image: Las Vegas Review-Journal)

Nevada saw its land-based gaming revenues decline overall by 4.4 percent in February, with poker down by 8 percent, reflecting a recent spate of poker room closures. Hooters became the second casino in Las Vegas to shutter its poker room this year, following the Linq (formerly the Imperial Palace), and the 14th over the past two and a half years.

Recent research by the University of Las Vegas says that Sin City now has the smallest number of live poker tables in almost a decade: 660 spread over 70 rooms.

Of that list, the Riviera is set to close altogether on May 4 to make way for a Las Vegas Convention Center expansion, and Bill’s Gambling Hall was recently converted into the boutique casino The Cromwell.

two words, “pool sharing”. Without sharing player pools among all the states as they start to get on the online poker bandwagon again they will never see what they “forcast” because people will stick with offshore that have more traffic and better gtd tournies etc.

It will never again be like it once was, and that is sad for my southern brothers/sisters of poker and row as well because of the huge market being secluded from a worldwide player pool.

They had a good thing going before black Friday and they blew it. The American poker market will never be the same online or live. All of the real grinders and pro’s have already moved out of the states to keep playing online and they’re not coming back here to play poker..