A Chabad center in Montreal is the latest organization to be linked to the ever-unravelling insider trading case against former Amaya CEO David Baazov and over a dozen alleged accomplices. The case took on a new twist this week when it was revealed that the Chabad center may have been used as a conduit for money laundering by the group. 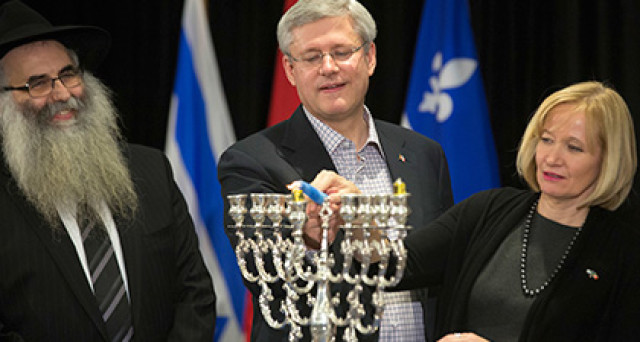 Rabbi Shalom Chriqui and former Canadian Prime Minister Stephen Harper and his wife Laureen lit Hanukkah candles together in 2014. In June, the AMF found $66,000 in the rabbi’s car, which they allege is linked to the David Baazov insider trading case. (Image: Reuters/Christinne Muschi)

According to court documents, in June, Quebec’s financial regulator AMF raided Centre Chabad, seizing financial records and CA$87,000 ($66,000) in cash. The global Chabad movement, which has centers around the world, is run by the Orthodox Jewish Hasidic movement, and focuses on bringing assimilated Jews back into traditional practices.

The AMF says it believes the money, which was found in the car of the center’s director Rabbi Shalom Chriqui, was given to the organization by former Amaya consultant Craig Levett.

Lawyers for Centre Chabad have filed papers seeking return of the funds, arguing that since they were not found on the property for which the warrant had been obtained, their seizure was illegal. It claims the money in question was a combination of voluntary donations and the proceeds of charitable fundraising.

The regulator alleges that Baazov was the head of an organized “pyramid” scheme that shared privileged information on company takeovers, in order to profit through the buying and selling of stock.

Also named are Levett and Baazov’s brother, Josh. All three are accused of receiving kickbacks for information, in the form of cash, checks, and luxury items. The group is believed to have made around $1.5 million in share dealings over a five-year period.

The Centre Chabad revelations came to light this week during a two-day independent hearing, at which none of the accused were present. It also presented an opportunity for Baazov’s lawyer, Sophie Melchers, to cross-examine AMF investigator, Xavier Saint-Pierre.

Melchers was able to get Saint-Pierre to admit that all evidence suggesting Baazov passed on privileged information was purely circumstantial. She also exposed what she called “omissions and flaws” in the AMF’s case, saying its evidence was based on “selective information.”

Saint-Pierre also said that the AMF had been unable to seize Baazov’s cell phone when it raided Amaya’s head office in Montreal in 2014. When investigators returned, they found he had replaced it with a new one.

“Today was the first step in setting the record straight,” said Baazov in a statement via his spokesman, Ian Robertson. “I would like to reiterate that I did not receive any money, gifts or anything for that matter as it relates to the trading by any of these people in any securities. I look forward to being exonerated and putting this behind me.”

Why is this on the Poker site??