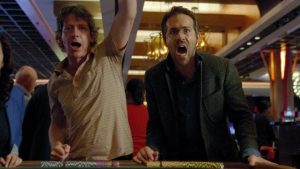 Mississippi Grind’s directors made the film’s stars play real-life poker for high stakes in a New Orleans casino prior to filming the movie. (Image: A24)

The drama, which also stars Australian actor, Ben Mendelsohn, as a gambler enlisting Reynolds’ help in building up a bankroll to pay back gambling debts,  was partly shot on location in New Orleans, and apparently Harrah’s lent a hand to add a little gambling authenticity.

The problem with the film, director Ryan Fleck told NOLA.com, was that neither of the lead actors had a lot of experience playing poker or gambling. Prior to shooting, a poker consultant from Harrah’s was employed to help out. But soon, things got out of hand.

“They [Reynolds and Mendelsohn] were spending a lot of time at the Harrah’s [New Orleans Casino] playing,” Fleck told the site.

“I think Ryan always knew when to walk away. He was like, ‘OK, I get it now. I’m going to go home.’ But Ben would grind it out for marathon sessions. He would play for 12 hours.”

The problem, the film-makers found, was that unlike his on-screen character, who is a degenerate gambler with massive losses, Mendelsohn couldn’t stop winning.

“For like a week he couldn’t lose, and he was up thousands and thousands of dollars, literally.

“But then, and I’m not sure if it was by design or not, the locals started to understand him as a player, and they started taking his money back. Sure enough, he lost it all.”

What’s It All About?

Mississippi Grind stars Ben Mendelsohn as Gerry, a skilled poker player but degenerate gambler who ends up (as these things tend to do) getting into debt with just about everyone in town.

To avoid another beating, he hooks up with charismatic poker player, Curtis (Ryan Reynolds), and the men set off on the road to win back the money Gerry needs to pay off his debts.

The goal? A seat at a high-stakes poker tournament in New Orleans where they hope their Mississippi grind will end.

Think Rounders ten years on, with Worm out of intensive care and Mike McDermott still questioning why he’s still hanging round with such a loser.

Mississippi Grind has received a small opening in the US already but goes nationwide and overseas on starting this week. The film is already getting plaudits for the performances of its two leads, particularly the hot-right-now Mendelsohn.

The gambling movie has an 89 percent rating on the Rotten Tomatoes site, with reviewers describing it as “one of the better movies about the gambling culture in recent years,” and, “a well-crafted and gritty tale of two compulsive gamblers”.

But the film has solid credentials in the form of a lead actor who’s been in some of the most well-received films of recent years. Aussie actor, Mendelsohn, starred alongside Ryan Gosling in the award-winning Place Beyond the Pines and with Christian Bale in The Dark Knight Rises, and will be seen in the upcoming Star Wars segment, Rogue One.

Meanwhile, the writing-directing team of Ryan Fleck and Anna Boden previously worked on Half Nelson, which launched the career of star, Ryan Gosling.