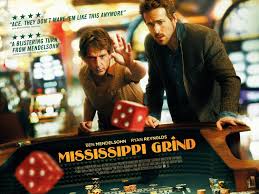 Mississippi Grind, the new poker road movie with echoes of The Gambler and California Split, opened at movie theaters across America this weekend, largely to positive reviews.

The movie stars Ryan Reynolds and Ben Mendelsohn as two haunted, dissolute soulmates, gambling their way across the South, and comes courtesy of the writer-director team Anna Boden and Ryan Fleck.

The duo said have said they first stumbled across the poker subculture in 2007, when they were shooting the movie, Sugar, about minor league baseball in Iowa, and became immediately fascinated by the lost souls they encountered at the poker tables of the Midwest.

Mendelsohn’s character, Gerry, is one such lost soul, a well-observed character that will feel only too familiar to poker players everywhere.

We all know a Gerry.

Self-deceiving and plagued by gambling debts, Gerry magnifies his wins and fabricates his losses, consoling himself always with the notion that that really big win is “just around the corner,” if only he could get a lucky break.

At the poker table he meets Reynold’s Curtis, who is ostensibly charming and handsome, but ultimately just as flawed and deluded and steeped in regret as his new friend.

Together, the two meander their way from Idaho to Mississippi, in search of redemption.

“When a climactic sequence of events arises, big bets, revealed secrets, a flurry of punches, it all feels fresh, surprising and plausible,” said A.O. Scott, writing in the New York Times.

“Mississippi Grind itself may be a bit of a throwback to the lived-in, character-driven, landscape-besotted films of the 1970s, but it’s less a pastiche or a homage than the cinematic equivalent of a classic song, expertly covered,” he added.

The film has been lauded for its accurate if gloomy portrayal of poker, which has always been presented unrealistically by Hollywood, from the Cincinnati Kid, to Casino Royale, to, yes, even Rounders.

“But none of these [previous poker] movies re-created the feeling of being alone and bored and inconsolable and stuck on the game in a lousy casino on a weekday night in the middle of nowhere,” wrote Grantland reviewer Sean Fennessey, who obviously plays a bit.

While most reviewers praised the film, there were some dissenters. Rodrigo Perez of Indiewire.com found it “underwhelming,” and complained that it featured “about four endings.”

“’Grind features buddy comedy, road hoppin’ elements that have a superficially enjoyable sheen, but ultimately the movie’s more interested in gazing somberly at the idea of the American male and his lost, self-destructive quality,” wrote Perez.

Let us not forget, though, Rounders opened to distinctly lukewarm reviews. Mississippi Grind, meanwhile, appears to have all the hallmarks of a future cult poker classic, albeit a distinctly unromanticized one.