For the ninth time since 2013, the MSPT held an $1,100 Main Event at FireKeepers Casino in Battle Creek, Michigan. The last three stops have set new records for largest poker tournament in state history, and this past weekend’s event was no exception drawing 1,066 entries and awarding more than a $1 million prize pool. 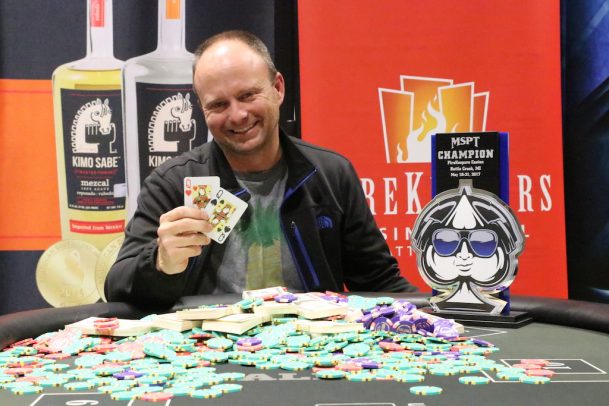 Mike Shanahan not only claimed a trophy and $216,829 prize, he’s also got bragging rights to winning the largest poker tournament in Michigan state history. (Image: MSPT)

The weekend’s biggest storyline was poker pro Aaron Massey, who had won the same tournament one year prior, making his third MSPT FireKeepers final table in a row.

That meant he final tabled the three largest events (fields of 820, 884 and 1,066 entries) in Michigan history.

At the end, the only man standing in Massey’s way of winning the same tournament for a second time in a year was a 49-year-old Indiana attorney.

Massey took 13 million chips into heads-up play against Shanahan’s 8.1 million, but it only took a couple of hands for the latter to flip the script.

In the final hand of the tournament, Massey four-bet all in holding the A♦Q♦ and Shanahan called with the Q♥Q♠. The board ran out 4♠J♥8♥K♣J♦ and Shanahan became the latest MSPT champ.

With a $131,646 consolation prize, Massey moved into third place on the MSPT all-time money list.

“I’ve been knocking on the door for a couple years, and this is the best I ever played,” Shanahan told MSPT officials after the win. “I’m elated. This was fun. There’s nothing like going deep in a tournament and finishing it off.”

In the Midwest, tournaments offering seven-figure prize pools are rare, especially outside Chicago. For the MSPT, the latest FireKeepers event was the tour’s largest ever held outside Las Vegas. It was also the first time one of their Midwestern stops not only crossed four figures in entries, but also offered a seven-figure prize pool.

“It’s hard to believe our first Michigan event in 2013 had 272 entrants, and now we’re catering to almost four times that,” MSPT President Bryan Mileski told CardsChat. “A big reason for that is FireKeepers Casino puts an emphasis on satellites, which industry veterans can tell you is the best way to help a poker ecosystem flourish. They know how to do it right.”

The numbers certainly seem to back up that statement. Last spring, 820 entrants set a state record, but it was surpassed by 884 entries in October’s MSPT Michigan State Poker Championship, which was won by Brett Blackwood for $188,314. Even outside the MSPT the property is drawing solid numbers.

In fact, many players are willing to travel to FireKeepers Casino from both the Detroit and Chicago markets for their tournaments. One such player is World Series of Poker bracelet winner Nick Jivkov, who in late April topped a field of 376 entries to win the poker room’s $400 Fifth Sunday Event for $26,320.

The MSPT’s next stop will be in Las Vegas June 4-9 with the $1,100 buy-in, $2.5 million GTD Main Event at The Venetian. After that, the tour will take a break for the summer before kicking off the second half of their Season 8 schedule in late July.