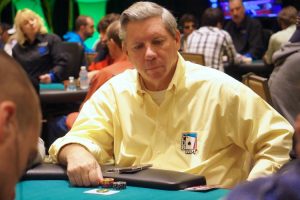 Mike Sexton sends out a rallying cry to troops by telling them to think like poker players. (Image: rounders.org)

Mike Sexton, the voice of the World Poker Tour, recently likened the game and its tactics to war.

Speaking to Task and Purpose, a news site for veterans, Sexton explained that a military leader who accepts risks and attacks when they have an advantage is always going to be more successful than one who avoids risk.

Sexton was a military man himself and served as a paratrooper from 1970 to 1972, but with more than 30 years’ worth of poker experience under his belt, it’s fair to say he knows a thing or two about strategy.

“I definitely think there’s a carry-over to military, and to life in general, when it comes to taking chances. In poker, your mission is to get your money in the pot when you have your best hand,” Sexton told Talk and Purpose.

The Theory of War

While poker might serve as a bit of light relief for the troops in between missions, it’s the application of the game’s theories that Sexton believes could be of use to them.

“You’re gonna have choices constantly when you’re on the battlefield. What to do: Do you want to guard the flank? Do you want to do this, do that? It’s all about choices and obviously your mission is to make the best choices given the circumstances at the time,” Sexton explained.

Of course, Sexton isn’t the first player to draw parallels between poker and war. Doyle Brunson is famed for his quotes (Dolyisms as Card Player has called them) and back in 2008 has famous said: “Poker is war. People pretend it is a game.”

Rallying Cry at a Time of Need

Whether or not that’s true, Sexton’s recent comments come at a time when Republican nominee Donald Trump has promised to restore the US military to its former glory.

Speaking at a rally in Fayetteville, home of Fort Bragg, Trump pledged to build a stronger military and improve the Veterans Affairs Department.

“You know what, I love the military. We’re going to take care of the military,” crowed the confident presidential candidate.

Although Sexton’s comments might not rally the troops in the same way, it’s likely Task and Purpose is aiming to restore some faith in the US military at a time when confidence in its powers appears to be slipping.

I like this : “Poker is war. People pretend it is a game.”

you can rely on this theory?