WPT commentator Mike Sexton may not be starting Tuesday at the WPT L.A. Poker Classic in the front spot, but the dynamic pro will likely be garnering the most attention when action picks back up at noon Pacific time at the Commerce Club in Los Angeles for Day Four. 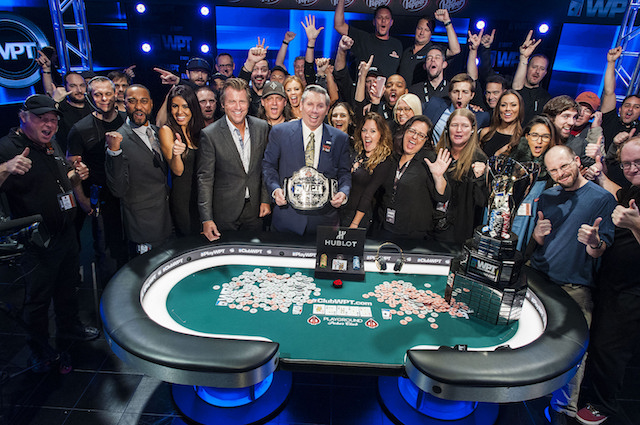 World Poker Tour host and color commentator Mike Sexton, (seen here holding up his WPT trophy last year), is in the chase for another one at the 2017 WPT L.A. Poker Classic, happening now at the Commerce in Southern California. (Image: pokerstrategy.com)

Day Three at the 2017 WPT L.A. Poker Classic brought the tournament down to 45 players, all vying for the $1,001,110 first place prize. Also among the players coming back for Day Four will be five other former champions and a WPT Player of the Year.

Daniel Strelitz is the only player who will kick off with over 1 million in chips (1,051,000). He doesn’t have any World Poker Tour titles, but he has six cashes on the tour.

The California native, competing in his home state, will nearly double his career winnings if he comes out victorious on Thursday. But to do so, he’ll need to hold onto his sizable lead against some of the most successful players of the WPT.

One of those competitors is the aforementioned Sexton, who is also a Poker Hall of Fame member and, of course, the very face of the tour, along with Vince Van Patten. The Indiana native enters Day Four with 739,000 in his chip stack, putting him second.

Sexton finally won his first WPT title in November at the partypoker.net WPT Montreal. His victory was considered one of the top moments in poker last year. He was nominated for Moment of the Year at the American Poker Awards, but lost to Jason Mercier’s memorable WSOP run.

The 69-year old poker legend took the youngsters to school on Monday. He taught them about experience and how sometimes, it matters the most. Sexton began the day with 270,000 (double the average stack size), but quickly turned on the jets.

Heavy Hitters Still in It

The 2016-2017 WPT season is winding down. With just a few remaining events before the April 7 Tournament of Champions, the Player of the Year (POY) race becomes meaningful.

There isn’t much of a runoff this year. Barring a miracle, Benjamin Zamani will win the award. He has 2,500 points, well above recent WPT champion Darren Elias (1,650). It’s all over but the shouting.

Zamani doesn’t have any titles this year, but he has finished in the top five in three events, including twice in 2nd place.