After Mike Noori Fails McDonalds $1,000 Wolf Down Prop Bet, All He Eats Are His Words

Poker player Mike Noori came about as close to eating $1,000 of McDonald’s food for a prop bet in 36 hours as Cleveland got within reaching the Super Bowl. Reminder: at 1-15, the Browns had the worst record in the NFL. 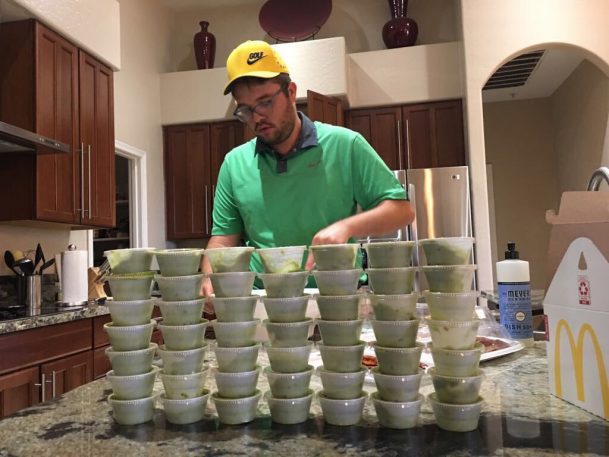 Mike Noori, seen behind a giant wall of guacamole containers, attempted to eat $1,000 of McDonald’s food in 36 hours, but didn’t even come close. (Image: Twitter)

Noori stood to win a reported $200,000 in wagers at 5-1 odds should he have succeeded in consuming that Mickey D’s grand’s worth of grub. But he only had a day and a half to reach his goal.

The challenge, to put it in perspective, adds up to more food than the average American eats at the fast-food joint in a year.

To say Noori came up short of eating his way to riches would be an understatement. He needed to down about 300 more Big Macs to reach his lofty goal, an image that’s hard to stomach even when writing about it. After just $95 of the food consumed, and with only a few hours left before the deadline, he threw in the towel. Or the french fries, as it were.

Wallet Bigger Than His Stomach

Try eating more than $10 in McDonald’s food: it’s not really that easy to do. And that’s because fast food isn’t expensive. A Mickey D’s burger, for example, only costs about a buck, and five to six dollars moves you into the pricier sandwich menu.

Which may be why hardly anyone on Poker Twitter predicted Noori would accomplish his goal. The thought of eating so much fast-food made some nauseous. As well it should, we might add.

Not helping was the reality that Noori admitted in a Periscope video that he’d gone out drinking the night before the challenge began. After the clock started, he played a round of golf and was noticeably tired late in the day. He even, bafflingly, noshed on some In-N-Out competitive fries during the challenge, which couldn’t have helped.

It’s possible he could have been a greater fast-food gourmand had he done a tad better job at preparation. That being said, most agreed it was a challenge even greater than the now infamous ‘Pee-Gate’ prop bet that will haunt Antonio Esfandiari till the day he dies.

Noori spent his $95 on a massive supply of guacamole, bacon, eggs, and apple slices. The rules were simple: he could only spend $200 on salads, had to eat at least $50 in burgers and a minimum of $300 in hot food, and could only vomit once. Drinks didn’t count towards the $1,000, not that any of that mattered, considering he couldn’t even hit $100.

A Silver, If Not a Stomach, Lining

The bet turned out to be an epic fail, but the challenge served a purpose anyway.

“@McHamburgler1k has officially called the bet off. Was a fun time from the inception of the bet until now, and we raised $14k for charity [at time of writing, GoFundMe account showed $12,575],” a person using Noori’s temporary account posted on Twitter. Noori’s friend, Phong “Turbo” Nguyen, travels to Vietnam each Christmas to deliver supplies, food, and clothing to the needy. A GoFundMe account was set up to raise money for his friend to increase the amount of goods delivered for the coming holiday.

The donations weren’t done through an official charity, which raised eyebrows from some Twitter followers. The money to be donated will come directly from Turbo when he travels to Vietnam. On the GoFundMe page, there was a note addressing these concerns.

“This is not done through an official charity, this is done directly by Turbo. So there is a trust factor involved. If you know Turbo and are comfortable donating, it is appreciated,” the message read.

“Be honest, that money’s already lost in pit games,” one responder said. Another referred to the performance as a “fraudulent effort” and “shameful.”

Whatever the truth of that matter, one human digestive system has at least been spared an agonizing trip to the ER.