For this Black Friday edition of “Flashback Friday,” I look back at one of the most memorable movie poker hands of all-time, played between bitter rivals Mike McDermott and Teddy “KGB.” The pot was monster, but something more meaningful — human life — was at stake in this 1998 poker game. 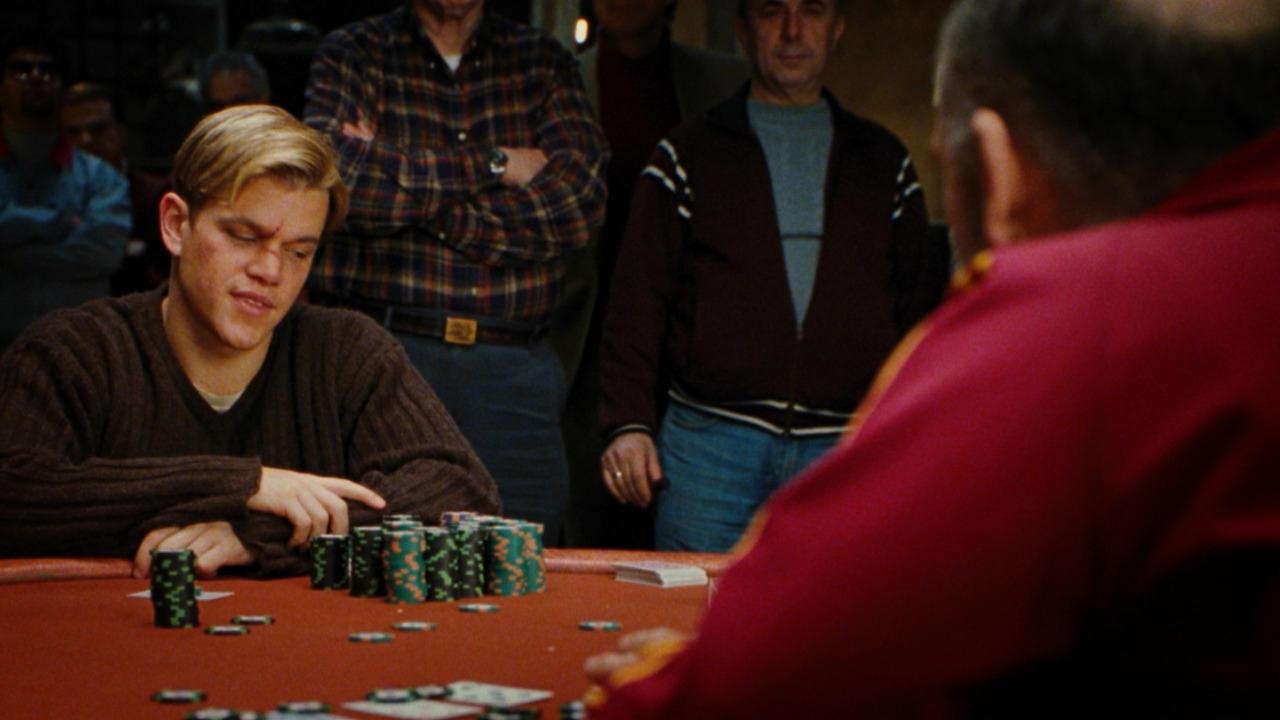 Teddy is the type you don’t want to mess with. A skilled poker player who crushed the New York underground poker scene, but also a Russian mobster who used any measure possible to collect a debt. Just ask McDermott’s friend, “Worm,” whose life was quite literally at stake in this memorable game.

In today’s poker world, pros use Twitter or forums to out other players who refuse to pay off a debt. Not Teddy. When deadbeats don’t pay up, he hires a creepy dude named “Grandma” to smash their face in. That’s why this “Flashback Friday” poker story is so memorable.

Most will tell you to stay in school, get a degree, and then chase your dreams. Mike McDermott, however, had other plans. The high-stakes grinder lacked the motivation required to finish law school. He was more interested in bluffing Johnny Chan and “Vegas and the f*****g Mirage.”

In the 1990’s, the Mirage in Las Vegas was home to some of the highest stakes games in the world. McDermott, a New Yorker who often played in Atlantic City, cared more about heading off to Sin City to play cards than becoming a lawyer.

His girlfriend, Jo, was holding him back. She didn’t like poker and wanted Mikey to stay in law school with her, instead of doing what makes him happy. When McDermott made the decision to choose poker over a woman who wanted to control his life, she left him.

Although there were some bumps in the road – most notably his friend “Worm” putting his life at risk – he would eventually find true happiness through poker thanks to one memorable hand.

“Worm,” a childhood friend of Mike, was released from prison in the late 1990’s. Upon his release, Mikey would soon learn that his homeboy owed a huge debt to KGB.

Teddy had once cleaned out McDermott’s entire bankroll in a poker game. Ever since that day, Mikey sought revenge, but didn’t have the cash to play in KGB’s high-stakes game.

Mike’s main focus was helping Worm pay off “Grandma,” who Teddy hired to collect the debt. McDermott was also on the hook, as he vouched for his friend. That meant if he couldn’t soon come up with the money, his life was also at risk.

Mikey, who had finally been released from his ball and chain, was back in action, grinding underground poker games so he could pay Grandma thousands of dollars to leave him alone. He worked hard, and was on his way to having the money to pay up before it was too late. But McDermott wasn’t ready to just hand over the money. The true gambler in him had other ideas. Would they pay off?

When Poker Becomes a Life and Death Situation

Instead of giving Grandma the money to settle the debt, Mike McDermott wanted to get revenge on his arch nemesis, Teddy KGB.

Most forget that McDermott was the originator of the “heads-up for (bank)rolls” challenges. He challenged Teddy to a high-stakes battle, mono a mono, at KGB’s house. If he lost the game, he wouldn’t have the money to pay off the debt. If he won, he would double his winnings and earn all sorts of pride points that totally matter in life.

McDermott and his friend were either going to end up in a morgue or rich.

Revenge is Oh, So Sweet

Mike arrived at KGB’s place with the confidence it takes to win a crucial poker match, but he had to back that swagger up with solid play.

After folding his top two pair to Teddy’s string bet on the flop – he correctly read that his opponent had flopped a straight – the intensity picked up.

With Teddy on tilt, McDermott went for the kill. Mikey picked up a suited 8-9 and apparently raised pre-flop, although that was unclear. The flop came 6-7-10 rainbow, giving McDermott the nuts.

Mikey checked and Teddy announced, “two grand,” while splashing the pot with what appeared to be less than $2,000 in chips. Hey, it’s his club, his rules, I guess. McDermott just called in an attempt to set a trap.

“You’re on a draw, Mike? Go away, this one it’s not good for you,” Teddy asked his opponent, which is a bit odd considering the only possible draw out there is a gut-shot straight draw and McDermott is too skilled of a player to put $2,000 in on a four-outer.

When the deuce hit on the turn, the law school dropout again checked. KGB grabbed some chips and sprayed them around the pot without announcing a bet size, which is of course totally legal. Once Teddy was finished sprinkling the pot, the bet was at $4,400. Again, Mike called.

The river was an ace, so McDermott still had the nuts. But Teddy remained convinced Mikey was on a draw and missed.

“It hurts, doesn’t it?” Teddy asked after his opponent checked. “You can’t believe what fell. All your dreams…hopes down the f*****g drain. Your fate (Grandma) is sitting right beside you.”

KGB then announced that the “ace could not have helped” McDermott, another odd read considering Mikey could have been holding anything from pocket aces to A-10. Or, if Teddy’s read was accurate and his opponent was on a draw, a hand like A-9 isn’t out of the question. But I digress.

The Russian mobster, again splashing the pot, then moved all-in. Despite holding the nuts, Mike McDermott wasn’t about to snap-call. This was his opportunity to stick it to the man who crushed his hopes and dreams in the past.

McDermott sat there with a smile on his face before letting KGB know he’s right, “the ace didn’t help me.”

“I flopped the nut straight,” he proudly said as he turned over his cards to scoop a massive pot.

KGB, in true mobster fashion, flipped out, but he paid McDermott his money even after Grandma encouraged him to continue playing. Teddy had enough. He was getting dominated all night long by a young hot shot, and had enough.

We can all learn a lesson from Teddy KGB. Some days, you just don’t have it. You either aren’t playing your best or your opponent is just better than you. On those days, it’s best to get up, get some rest, and come back another day with a fresh mind.

Granted, we’ve never heard from KGB since. Maybe he never recovered from that beat-down McDermott laid on him. Hopefully, Brian Koppelman and David Levien, the screenwriters behind Rounders, will let us know what these two exciting poker players are up to.

it s a great article , i just watched the scene , the way how he told him that he already knows all his moves was great . i think i m going watch this movie tonight , Matt Damon is great actor and all the others in the movie also .

nostalgia for a great movie. hope that in soon will the second part of. I really want you to come out.
thank you for that memory.