Mike Matusow wears his emotions on his sleeve and has made it clear how desperate he is to end a five-year WSOP bracelet drought. On Thursday, in the $1,500 Pot-Limit Omaha Hi-Lo 8 or Better event, he built a big stack at the final table but ended up busting in 4th place, an impressive but disappointing finish for “The Mouth.” 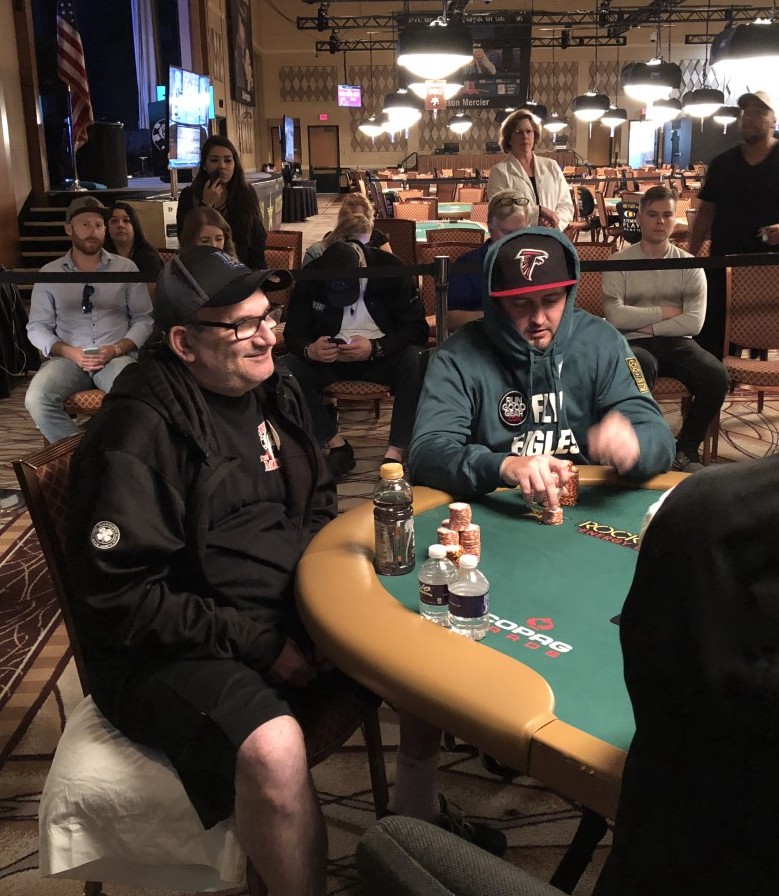 Mike Matusow came close but still short in his quest for a fifth bracelet in the WSOP $1,500 PLO/8 event. (Image: CardsChat News)

Joey Couden, an Ohio resident, scooped the bracelet — his first — from the superstars at the final table, including another poker legend, Daniel Negreanu who, like Matusow, hasn’t won a WSOP event since 2013.

Negreanu, who was the first elimination at the final table (9th place) and Matusow, two 40-something greats who appeared on TV as much as anyone during poker’s heyday, still have a passion for winning bracelets but neither have been able to close the deal at a final table the past five years despite many opportunities.

‘One Time for Mikey?’

The Mouth was confident heading into the final table on Thursday that he was hours away from ending the drought.

We all get a 1 time in poker. I will ask to use my 1 time for Tomorrow! This is my best game, plus I'm super hungry and focused. I've won 1 bracelet every 5 yrs last 15 and this us yr 5. Tomorrow is my time! Ty for all of your support! #bracelettime

Early at the final table, Negreanu was down to barely more than one big blind (19,000) but quickly spun it up to over 500,000. The impressive heater didn’t last long as he would soon be the first to exit the Rio’s Brasilia room.

After Negreanu busted, The Mouth had one of the shorter stacks at the table but predicted a “rush” was on the way. In the final hand before dinner break, Bruno Fitoussi hit a lucky river card to chop with Matusow, who wasn’t happy about losing out on an opportunity to win a big pot.

“Do you think I’m going to put my whole f*cking tournament in drawing dead?” he asked Fitoussi in the Rio halls after the hand. “What the f*ck were you doing there?”

A still irritated Matusow returned to the table after break and finally caught a few hands before losing nearly his entire stack to Couden, the eventual champion, who hit the nut flush.

“I had the queen-high flush,” Matusow told his opponent before frustratingly mucking his cards.

Moments later, he lost his remaining stack to Fitoussi and was eliminated in 4th place. He said on Twitter it was a “tough pill to swallow” coming up short but will have plenty more opportunities to win his fifth bracelet.

I'd really like to see the poker world play everyday in severe chronic pain and have half results I do every year. I got more heart then any human alive and my turn is coming! #positivity

Matusow has suffered knee and back pain over the past few years. He uses a motorized scooter to get around. When he walks, he hobbles. We can’t confirm his claim that he has “more heart” than (not “then,” Mike) any other human alive, however. There are cancer patients and soldiers fighting overseas who may disagree.

just saw the pain patches he’s wearing and him describing the effects of the pain in DNeg’s latest Vlog. Certainly has a lot of heart and will to play how he’s playing through all that. Here’s hoping he gets one.