Last weekend, Mike Leah and Ryan Yu made it to heads-up play in the WPT Fallsview, which took place on the Canadian side of Niagara Falls. 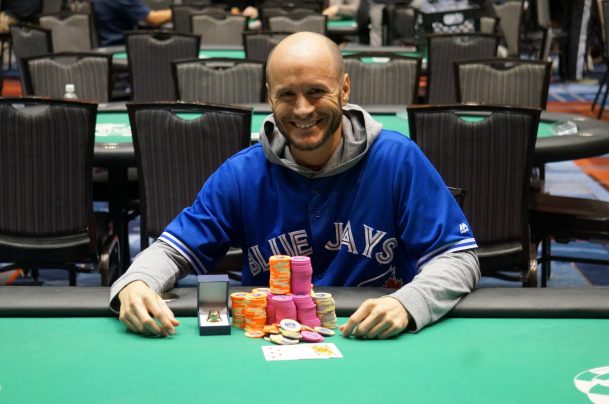 Despite being down in chips, Leah negotiated a deal in which he would be crowned champion.

Since the WPT does not officially facilitate deals, Yu and Leah engaged in a controversial chip dump. Vilified by many for “buying a title,” Leah took to social media to tell his side of the story.

On paper, meaning what was reported by the WPT to HendonMob, Leah’s WPT Fallsview “win” over a field of 517 entries and was good for $358,531 and a seat into the August WPT Tournament of Champions. In reality, the two worked a private deal based on an exact Independent Chip Model (ICM) chop.

“The one thing that stings me is the words ‘buy a trophy/title’ or something to that effect,” Leah said in a lengthy Facebook post. “I have never or will ever ‘pay’ for a win … Not sure why I feel the need to defend myself but I feel my integrity is being attacked which doesn’t feel very good.”

Leah then sets the stage by revealing that, while he was backed for the first six or seven years of his career, he has been playing exclusively on his own for more than three years. He also states that while he has “turned down more chops than most,” he has also chopped many, which is standard in the industry.

“As soon as we were Heads-Up [Ryan Yu] mentioned something about talking deal (Can’t remember his exact words),” wrote Leah. “I hadn’t considered making a deal until that exact moment; I believe my words were something like: ‘Well I wouldn’t consider any deal unless I got the win, trophy, etc.’ I didn’t know how Ryan would respond and honestly didn’t care I would’ve been happy to play for it – HU for a WPT title; not much more exciting than that. But very quickly he responded that he’d be fine with that if we did even ICM.”

Leah follows it up by stating that the two worked out the terms, which included taking the $15K Tournament of Champions seat into consideration and how much they’d tip dealers and staff, before returning to the table. WPT officials informed them that they needed to play it out.

“Ryan & I figured the easiest/quickest way to get it over was just for him to raise fold large portions of his stack,” Leah explained.

“We did this in an extremely obvious way, making a lot of jokes and having fun. We were both extremely happy with the outcome. Now looking back I see how it’s embarrassing/disappointing for the WPT, Reporting staff and even poker players/fans having ridiculous hand histories like that being posted on the website live updates and deciding the tournament that way. There has to be a better way to go about it. We were not trying to disrespect any parties involved but we were celebrating ours ‘wins’ – and made a decision in our own best interests.”

Reactions to Leah’s statement regarding the WPT Fallsview deal were mixed.

“Majors should be played out,” wrote World Series of Poker bracelet winner Grant Hinkle. “He had you 2-1 in chips so I don’t agree with those saying you deserved the win. Congrats on the money and deal, but hard to consider you a WPT Champ without a sidenote or asterisk.”

“You’re an embarrassment to poker, and give a slap in the face to all the rest of us who would fight to the end for this kind of opportunity. Pathetic, awkward, disturbing. Basically unethical if you ask me. I hope they ban you from future events.”

While there was a fair share of haters, there was no shortage of players supporting Leah.

“I don’t really understand the huge uproar about this to be honest,” wrote Vanessa Kade. “Chip dumping is for sure cheating when there are multiple people playing who are not a part of what’s going on. When it’s HU though? This really seems like a clear-cut case of a means to facilitate your own deal, which just doesn’t seem that unreasonable to me.”

Alex Keating added his two cents: “Don’t see any issues here. Not good for poker, but no one did anything wrong. As long as you’re not buying trophies and POY points. He didn’t. His opponent got no extra money for forfeiting the trophy.

The World Poker Tour has yet to weigh in on the controversy surrounding the WPT Fallsview. The tour is now headed to California for the L.A. Poker Classic February 24 through March 1.

Seems this flies directly in the face of ‘poker is a game of skill’ … unless the ‘skill’ is negotiating a win that includes chip dumping …. [sad].