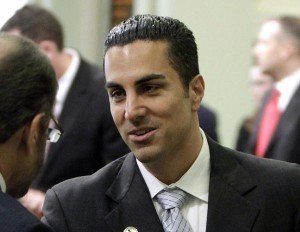 California Assemblyman Mike Gatto’s online poker legislation AB9 has not been well-received by the PPA, a tribal coalition, or PokerStars. (Image: Rich Pedroncelli/AP)

California online poker would bring in much-needed revenues to the cash-strapped Golden State, which is why Assemblyman Mike Gatto introduced AB 9 this week,  AKA the Internet Poker Consumer Protection Act of 2015.

A coalition of card rooms and two Indian tribes aligned with PokerStars immediately slammed Gatto’s bill for “bad actor” language targeting the poker giant, however, and are speaking out collectively against the measure.

In a press release, the coalition says, “Unfortunately, AB 9 is a rehash of previously unsuccessful proposals. Any bill that seeks to establish artificial competitive advantages for some, while denying Californians the best online poker experiences, will only serve to divide the community and will be opposed by our coalition.”

The rush to bring online poker to California has been a lengthy journey, and while the ball has been rolling for some time, residents are currently unable to play remote games.

Gatto’s bill would permit tribal operators and card clubs to offer Internet poker to those physically in the state, but its “bad actor” clause would greatly reduce player options. The legislation’s biggest sticking point seeks to penalize PokerStars for operating in the state following the December 31, 2006, enactment of the Unlawful Internet Gaming Enforcement Act (UIGEA).

Language in AB 9 says these so-called “bad actors” are unwelcome, regardless of whether the company has been acquired post-UIGEA, which of course is directly pointed at Amaya Gaming’s $4.9 billion purchase of PokerStars earlier this year.

While Gatto’s bill is unpopular among PokerStars and its coalition, the California Tribal Business Alliance (CTBA) welcomed AB 9 after its members felt wronged for not being allowed to operate online as the world’s largest online card room stripped customers from brick-and-mortar casinos. CTBA Chair Leslie Lohse promises to block any legislation welcoming PokerStars back to the state.

The Poker Players Alliance (PPA) is also anti-Gatto, as the group offered its response to the bill on Thursday.

PPA Executive Director John Pappas said of AB 9, “The bill has too many flaws right now to support it… We’ve always felt they should open it up to all possible participants and it shouldn’t be limited to just card rooms and tribes. The more applicants, the greater the potential for a better product.”

PPA members also oppose Gatto’s provision that requires all online poker accounts to be opened at a physical casino or “satellite service center.” The idea of the provision is to prevent minors from being able to gamble online and to combat identity theft. Pappas says the concept is “defeating the purpose of online poker.”

It appears The Internet Poker Consumer Protection Act of 2015 has a long road ahead, with parties lining up ready to campaign for their specific goals. Providing online poker to California’s 38 million residents is a vital next step in the overall stability of Internet gambling in the United States. The country’s largest state is expected to come on board in 2015, but whether it’s AB 9 or another bill remains to be seen.