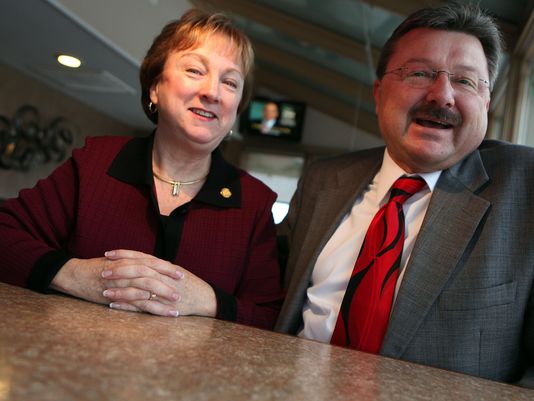 A Michigan online poker controversy has erupted after it came out that State Senator Mike Kowall’s wife Eileen works for the lobbying organization that represents Amaya Inc. in the state. The senator insists his wife’s employment at the firm will not impact his iPoker and gaming bill SB 889. (Image: freep.com)

A Michigan online poker bill suffered a potential credibility blow this week, as its lead sponsor, State Senator Mike Kowall (R-15th), was forced to defend himself from conflict of interest accusations.

Kowall denied that there were any improprieties arising from the fact that his wife Eileen works for the firm hired by PokerStars parent Amaya to lobby for online gambling in the state.

Eileen Kowall is a lobbyist at Lansing-based MGS Consultants, which says on its website that it “provid[es] the highest level of local, state, and federal government funding consultations.”

The Senator’s wife and four other lobbyists from the firm attended a recent legislative hearing of SB 889, at which representatives of Amaya gave testimony. But her husband told the Detroit Free Press that there was no conflict of interest, because Amaya is not one of her direct clients.

Kowall also noted he had been working on the legislation long before Eileen joined MGS in 2015.

But while Kowall insisted his wife would not personally benefit from the legislation, he acknowledged that her employer would, a fact that some find troubling.

Keep Your Hands Off

“We often don’t know when things like this are happening,” said Craig Mauger, executive director of the Michigan Campaign Finance Network, a non-partisan organization that monitors the influence of money in politics.

“On its face, a lawmaker’s spouse lobbying for an entity that is working with a lawmaker … that does seem to be a conflict. This is probably an issue that he should have kept his hands off [of],” he said.

Kowall introduced SB 889 to the State Senate in mid-March, and Michigan suddenly supplanted Pennsylvania and California as the state most likely to legalize and regulate online poker and casino gaming.

The bill caused excitement in poker circles, because it appears to be the only legislative effort in the US so far that makes express provisions for the possibility of international, as well as interstate, liquidity sharing.

It also proposes a relatively low 10 percent tax rate on gross gaming revenue, which should allow operators to remain competitive with the offshore market.

Last week, in an interview with CardPlayer, Kowall’s Chief of Staff and Legislative Director Dave Biswas said he “saw no reason” why the bill would not pass in 2016, although Michigan Gaming Control Board Deputy Director David Murley has expressed concerns that there may be constitutional issues to overcome before the bill can become law.

Speaking to the Free Press this week, MGS Managing Partner Jeremiah Mankopf refused to say whether Eileen Kowall has worked on the Amaya project at any point. MGS has been lobbying for Amaya in Michigan since 2007.

“I’m the lead on this,” he said. “Everybody in the firm has their own clients . . . I don’t see a conflict of interest.”