Olympic swimming legend Michael Phelps will be dipping his toes into the waters of the poker world once again this February courtesy of a charity tournament. 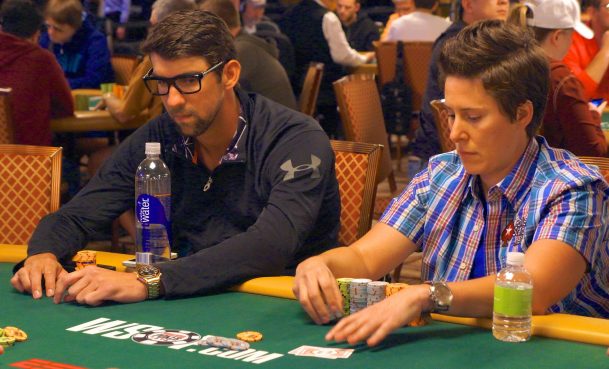 Olympian Michael Phelps will host a charity poker event alongside Jamie Gold the night before the Super Bowl. (Image: reddit/whojedi)

Aside from winning a record-breaking 28 Olympic medals, Phelps has been a long-time poker enthusiast. Often seen playing in cash games at the Venetian in Las Vegas, as well as live and online tournaments, Phelps has proven that he’s only a fish when he’s in the water.

Phelps is a Poker Shark

In fact, back in 2011 Phelps bought a house in Baltimore which he shared with friend and tournament pro, Jeff Gross. According to a 2011 CardPlayer interview with Gross, Phelps took the game as seriously as most professionals and was “easily one of the best celebrity poker players around.”

Perhaps Phelps’ most famous poker session came during the semi-final of the 200m butterfly event at the 2016 Rio Olympics. While the likes of rival Chad le Clos were bouncing around before the race, Phelps was sat at the side of the pool on his phone playing a game of Pineapple.

On that occasion, the round of poker didn’t appear to affect his concentration as he finished second in the race before winning gold in the final.

A Chance to Win Some Golden Tuition

With a long history in the game and his swimming career all but over, Phelps is now using his passion to help a good cause. Working in conjunction with Hollywood actor Josh Brolin, Phelps will host the Big Game Big Give party at the Holthouse mansion the night before the Super Bowl.

The event itself will feature a selection of live entertainment and charity auctions, but it’s the after party antics that Phelps will be looking forward to. To help raise even more money for the Giving Back Fund, Phelps will partner with former WSOP Main Event champion, Jamie Gold, for a VIP poker tournament.

According to the official Big Game Big Give website, the event will be open to 160 runners and the buy-ins will start at $2,000 (it’s assumed VIPs can buy extra seats for more). As well as getting to test their skills and raise money for charity, the top 20 VIP finishers will get a custom poker table autographed by the celebrities.

On top of that prize, the overall winner will get six months’ worth of coaching from Gold as well as a seat in the 2017 WSOP Main Event.

Although Gold hasn’t managed to replicate his epic 2006 Main Event run in recent years, the chance to play against celebrities such as Phelps and event emcee David Schwimmer (Ross from Friends) should be enough to fill the 160 seats available.