The 2017 Rock ‘n’ Roll Poker Open at Seminole Hard Rock Hotel and Casino in Hollywood, Florida, drew 585 entrants to its $3,500 Championship Event, which offered up a $2 million prize pool. On Wednesday, New York’s Michael Newman overcame a stacked final table to walk away with a career-high $374,240 payday. 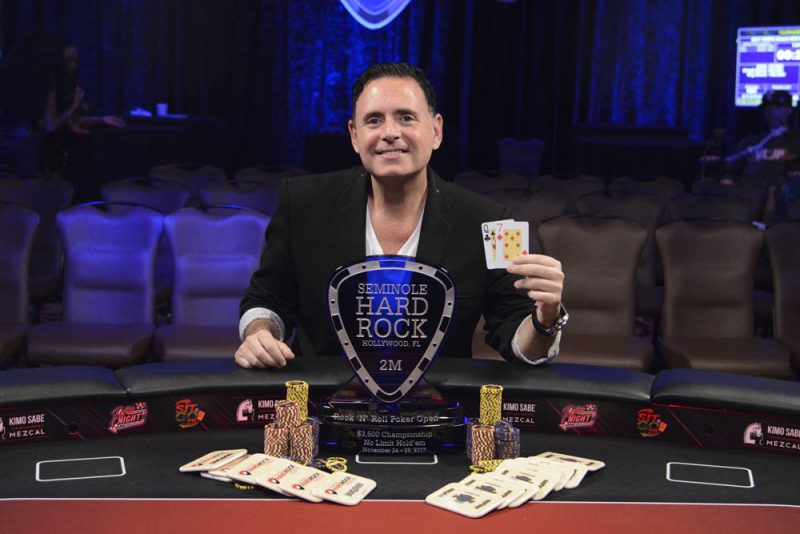 Michael Newman doubled his lifetime earnings in one swoop by taking down the Rock ‘n’ Roll Poker Open. (Image: SHRPO)

Prior to the win, 48-year-old Michael Newman, a former Wall Streeter now plying his banking trade in Florida, had $383,217 in career tournament winnings, with a prior best of just $30,640 for finishing 12th in the same event two years earlier.

“It’s probably the best thing that I’ve ever done in poker,” Newman told tournament officials after his victory. “Money’s great, money’s always great, but (it’s great) to get through the toughest field I’ve ever played against in my life.”

That tough field included some of the biggest names in poker, many of whom were at the final table. On Day 4, MSPT Potawatomi champ Ari Engel began the final table as the chip leader, but he lost it when Michael Newman doubled through him in the very first hand.

“The first hand was very pivotal,” said Newman. “I had top pair with the nut flush draw on the turn. I was like, ‘The first hand I’m going to be out?’ but I had to call, and I was right.”

Another player to fall to Michael Newman was SHRPO Ambassadors and local favorite Sheddy Siddiqui, who earlier this year unexpectedly lost his 39-year-old wife, Cathy, the mother of his two young boys. It was a devastating loss for Siddiqui, who had no choice to carry on for his kids, albeit with the support of the poker world.

In his final hand, which took place in Level 31 (60k/120k/20k), Newman opened for 275,000 with A♠A♦ and Siddiqui called from the big blind with the A♣J♣. The J♥10♥3♦ flop saw the chips get in, and Siddiqui was looking for another jack. Unfortunately for him, he didn’t get one as the 7♣ bricked on the turn followed by the 9♠ on the river. Siddiqui earned $121,920 for his fourth-place finish, which marked the second-largest score of his career.

“I’m glad I’m able to play at this level, but it would take a lot of time to be a pro,” said Newman. “As much as I love the game, I don’t know if I could handle the ups, the downs, and the swings. No matter how good you are, you also need the luck.”