Michael Mizrachi is a champion once again. This time, he took first place in a $570 buy-in event at Seminole Hard Rock Hotel and Casino in Hollywood, Florida on April 13. The tournament was part of the current World Poker Tour (WPT) series which culminates with a $10,000 finale on Sunday, April 17. Mizrachi outlasted 311 other players, winning $32,899. 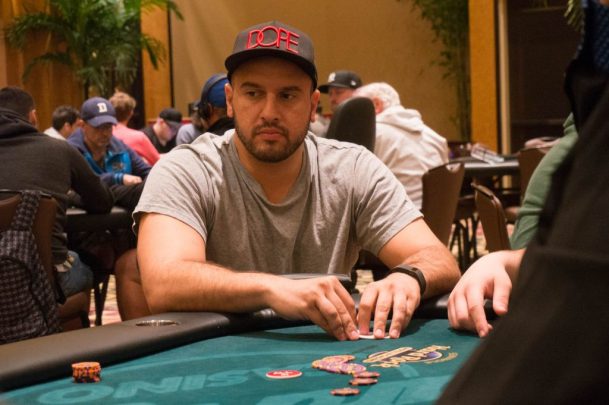 Michael Mizrachi has another poker tournament title to his belt, having taken first at a lower limit Seminole Hard Rock WPT event this week.  (Image: seminolehardrockopen.com )

For The Grinder, that kind of money may not be a big deal, but a win is always nice to a poker player, no matter the amount. Mizrachi has nearly $15 million in lifetime live tournament earnings to his name.

Mizrachi entered the final table of seven players with a commanding chip lead. His 1,744,000 chips were nearly three times his closest competitor. And he had no problem holding onto that chip lead on his way to another victory. The Grinder finished off Karp after flopping two-pair on an all-in bet.

Michael Mizrachi has been one of the most consistent and successful poker players over the past dozen years. His tournament resume includes three World Series of Poker bracelets and a pair of World Poker Tour Main Event championships. He is eligible to compete in the WPT Tournament of Champions next week as a result of being a Champions Club member, although he will have to pay his way in with the hefty $15,000 entry fee.

The $14,651,243 The Grinder has won in lifetime live poker tournaments isn’t tops on Florida’s all-time money list, by the way. Jason Mercier, a current member of the New York Rounders of the Global Poker League, holds that title. He has surpassed $16 million for lifetime intake.

Mizrachi’s recent victory was his biggest win since taking home $45,000 in a WPT High Roller tournament in Nottingham in the UK five months ago. Perhaps his greatest accomplishment ever wasn’t even a first-place finish. At the 2010 WSOP Main Event, he finished 5th out of 7,319 entrants, earning $2,332,992. Jonathan Duhamel, another skilled pro, won the bracelet that year.

Currently, Mizrachi is 15th in the world on the all-time live tournament earnings list. Daniel Negreanu tops the chart, of course, followed by prop bet aficionado Antonio Esfandiari and then Erik Seidel. Mizrachi is less than $400,000 short of Steve O’Dwyer for 14th place.

Big One Just Days Away

The WPT Tournament of Champions, a season-ending championship event, will take place April 22 at the same casino in Florida, the Seminole Hard Rock, where Mizrachi just won. He is eligible for this event due to being a former WPT champion.

Other participants include Season 14 winners (that’s the current season). There is one spot in the TOC still up for grabs. It will be settled next week in the final WPT Main Event of the year at Seminole Hard Rock.