For the second time this year, PokerStars was at the Sochi Casino and Resort in Russia’s Krasnodar region, for the latest PokerStars Festival Sochi. It was there that PokerStars joined forces with Playboy for a memorable players’ party featuring music by Ukrainian pop star Alekseev, which could only be overshadowed by spirited poker action. 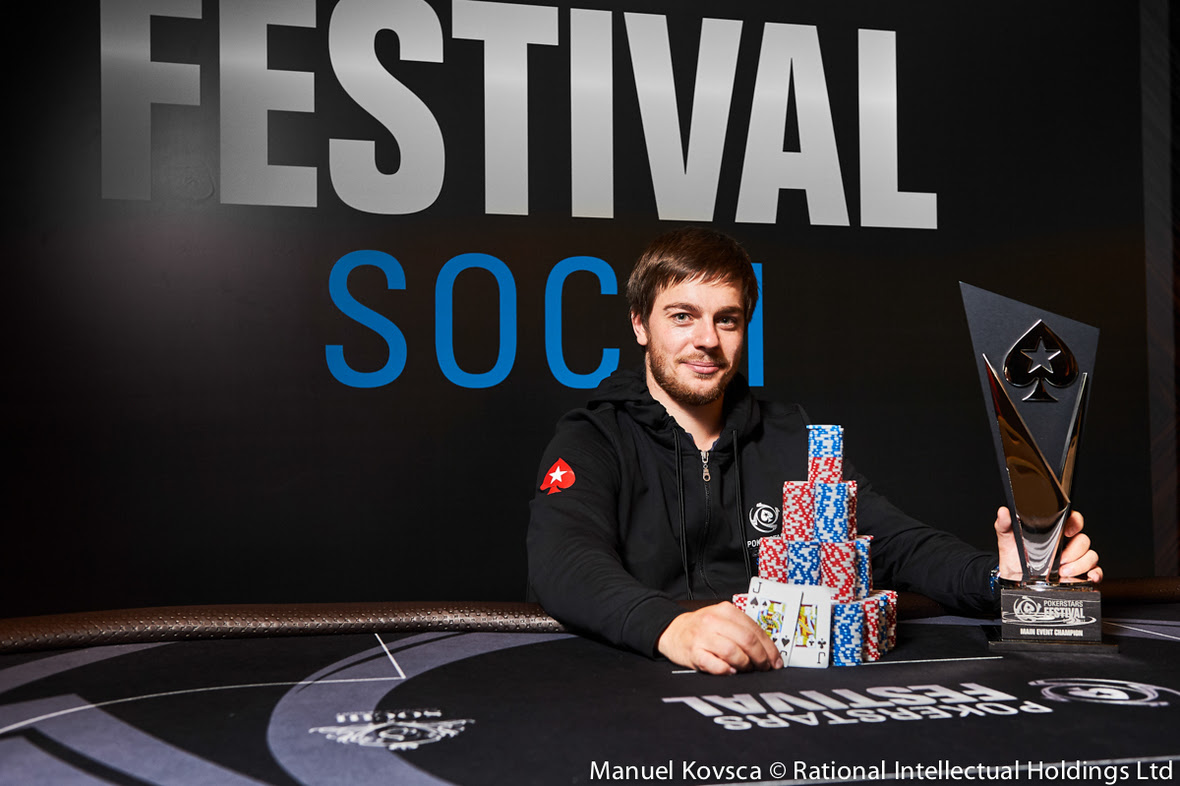 Aleksandr Merzhvinskiy was among the big winners from a record-breaking PokerStars Festival Sochi. (Image: PokerStars)

The first PokerStars Championship Sochi took place in May, and saw Pavel Shirshikov defeat a field of 387 players to win the RUB29.1 million ($515,774) first place prize. The latest stop was a festival, which features smaller and more affordable events.

The stop kicked off with a $180 buy-in Megastack, which became the largest event ever held at the Sochi Casino and Resort, and the biggest field on Russian soil with 1,384 entries. The tournament ended in an eight-way chop, with Sergey Terentiev being named champ for $22,627.

The latest PokerStars Festival Sochi Main Event attracted 699 entries, which included 559 unique players from 17 different countries. Russians dominated the field with 507 players, but others from as far away as Israel, Turkey, and Argentina also competed.

Russia’s Aleksandr Merzhvinskiy began the final day as a big chip leader among the final 27 players. He had twice as many chips as his next closest opponent. However, by the time the final table rolled around, he had dropped to sixth in chips.

Merzhvinskiy hung in there, and before long found himself heads-up with even stacks against Alexsandr Denisov. The two talked about a deal, but couldn’t come to terms. So in what would be the final hand of the tournament, Merzhvinskiy limped with pocket jacks and called after Denisov shoved holding pocket sixes. The board ran out clean, with the best hand holdingup, and Merzhvinskiy became the PokerStars Festival Sochi Main Event champion.

Another premiere event on the PokerStars Festival Sochi schedule was the RUB132,000 ($2,290) High Roller, which attracted 96 entries and saw circuit grinder Kiryl Radzivonau, who finished sixth in the 2014 EPT Barcelona for €224,500, emerge victorious to win $52,030.

Day 2 saw 27 players return to action, including Team PokerStars Pros and World Series of Poker bracelet winners Igor Kurganov and Liv Boeree, neither of whom cashed. Radzivonau, who began the day fifth in chips, ended up in heads-up play against Russian Oleg Lipkin.

The two didn’t battle long before Lipkin shoved with Q♥8♥, and Radzivonau called with a dominating Ace-Queen. The board ran out with nothing special for Lipkin, and the Russian had to settle for second place and a $36,264 consolation prize.

With nearly $2 million in live tournament earnings, Radzivonau moved into sixth place on the all-time poker money list for Belarusians. He also has an impressive online résumé including a 2012 Sunday Million win in which he bested a field 5,776 players to win $166,073.