Las Vegas is the seventh most popular tourist destination for Memorial Day Weekend, and poker rooms stand to benefit from the surge of visitors. 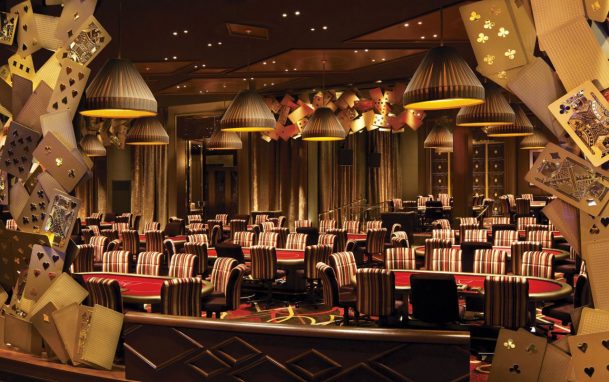 We’re willing to bet everything we have that the Aria poker room won’t be empty this holiday weekend. (Image: Aria Poker)

The Las Vegas Review-Journal estimates 328,000 tourists will visit the city over this upcoming holiday weekend. Las Vegas tourists are expected to spend $252.6 million in just the next four days. There are nearly 150,000 hotel rooms in the area, and an estimated 97 percent will be occupied from Thursday through Monday.

As the holiday approaches, just days before the start of the 2017 World Series of Poker, below is a list of some of the city’s top upcoming tournaments that aren’t the WSOP. With so many fish in town, they can still result in fun and profit.

Games for All Buy-Ins

Caesars Palace, Treasure Island, Mirage, and Planet Hollywood, all located on the Strip, have daily tournaments running over the weekend for $100 or less.

For something a little bigger, the Wynn-Encore’s usual Saturday noon tournament generally draws a decent field. This $225 buy-in event comes with a $25,000 guaranteed prize pool. Players start with 10,000 chips.

A few doors down, the Venetian’s quarterly DeepStack Extravaganza is well underway. At noon on Friday, a $600 buy-in “SuperStack” starts, offering a $200,000 guarantee. This tournament has a second starting day on Saturday, and finishes on Sunday. This series also has one-day tournaments on Friday, Saturday, and Sunday for $300, $400, and $300 with rebuys.

For one of the most popular daily tournaments in town, the Aria’s $240 tournament starts at 11 am and usually draws field sizes between 50 to 100 on non-holiday weekends. Players begin with 20,000 chips.

But that’s not enough to tickle your no-limit hold’em fancy, on Sunday the Super High Roller Bowl at Aria begins. That one costs $300,000 to enter, and registration is already closed. But you can expect plenty of interesting side action to develop with all the big names around, buying in for extra-high stakes.

Not all the good action in town is on the Strip. There are plenty of other places to go “fishing.”

Just a mile west of Las Vegas Boulevard, the Orleans has a 7 pm tournament for $130 on Friday and Saturday. These events have solid blind structures that offer a lot of play and often attract more than 100 players, making for nice payouts.

On Sunday, the Orleans spreads a $105 buy-in HORSE tournament.

If you’re going to be downtown on Monday, the Golden Nugget has a noon tournament with a $70 buy-in. And Binion’s, previous home to the WSOP, has a $100 event that starts at 1 pm. Though not related, one tournament can serve as a second-chance event for the other.

As Memorial Day Weekend concludes, the poker action in Las Vegas is not likely to subside, as the 2017 WSOP will be ready to kick into high gear.

Las Vegas is the place to be year-round for poker players. But with the influx of tourists arriving this weekend, the tournaments should be livelier and cash games juicier than usual.

It is frustrating to see tournament buyin amounts without mentioning the amount that goes into the prize fund .