Max Pescatori Auctions Off WSOP Bracelet on eBay for Charity

Max Pescatori is another example of a poker player who gives back to his community. The four-time WSOP bracelet winner is auctioning off one he won in 2015 on eBay to raise money for charity. 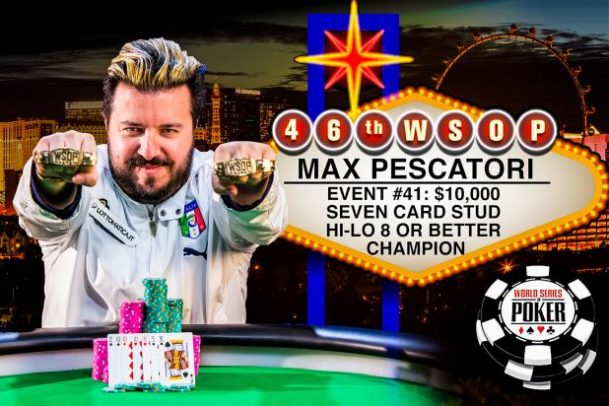 Max Pescatori is auctioning off the bracelet shown in the photo on eBay to raise money for charity. (Image: wsop.com)

The poker champion hails from Italy, the home country of one of the most devastating earthquakes in recent history. More than 240 people were killed last summer in a town called Amatrice due to a 6.2-magnitude earthquake.

Things got even worse for the city when another earthquake, and some heavy snow, hit the city this winter. A poker-playing friend of Pescatori’s started a charity to raise money for survivors of the tragic events.

All proceeds from the eBay auction will go to the charity. As of Wednesday morning, the bidding reached $6,000. Bids can be placed until the ad is removed on February 16th.

The bracelet up for auction was won in 2015 in a $10,000 Seven-Card Stud Hi-Lo 8 or Better event. It was a “special” victory for Pescatori. He beat Stephen Chidwick heads-up for the title. Daniel Negreanu finished in 3rd place.

Pescatori won $292,158 on that day. It was his second bracelet of the summer. The bidding, thus far, has been successful. More than 45 bids have been placed as of February 8, and he’s already hit his $6,000 goal with eight days remaining.

He had a successful summer in 2016. The Italian pro cashed in seven World Series of Poker events, finishing 9th or better in three tournaments.

He didn’t accumulate that $4.2 million in winnings from one or two lucky heaters like many players. In fact, his largest score is $682,000 (1st place in a 2006 WSOP $2,500 hold’em event). Pescatori has been a consistent performer for many years.

McEvoy’s purpose for selling the bracelet are unknown. He may have needed the money, had a charity in mind he hoped to raise money for, or no longer feels attached to it.

In 2013, Jamie Gold made $65,000 auctioning off his 2007 Main Event bracelet. That’s a drop in the bucket compared to the $12 million he won earning the piece of jewelry, the most in tournament history.