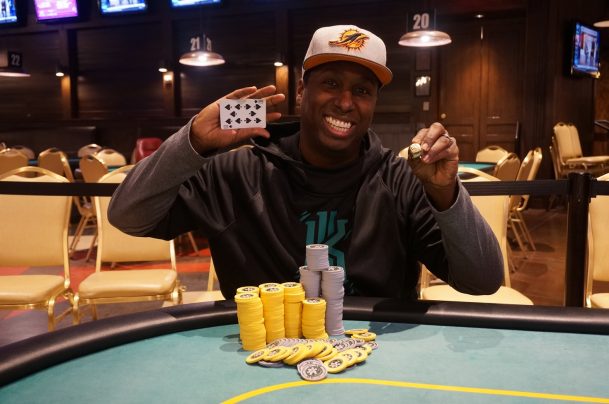 On Monday, Hawkins topped a field of 271 players to win the WSOP Circuit Horseshoe Council Bluffs $1,675 Main Event for $97,561, a seat into the 2017 Global Casino Championship, and a history-making piece of jewelry.

One year ago, Hawkins became the first player to win back-to-back WSOP Circuit Main Events, one of which was at Horseshoe Council Bluffs for $113,152. After taking down the Main Event at the WSOP Circuit Harrah’s Cherokee for $279,722 two weeks later, and then the Palm Beach Kennel Club Main Event for $95,921 in November, Hawkins tied Chris Ferguson and Blair Hinkle, who did it in two and a half and four years respectively, as the only players to win three WSOP Circuit Main Events.

It was a run that earned Hawkins “Breakout Performance of the Year” at the third annual American Poker Awards.

By defending his title in Council Bluffs, Hawkins became the first player to amass four Main Event wins, and he did it over the course of just two seasons. All told, Hawkins has 66 WSOP cashes totaling $1,492,371, of which more than $1.1 million has come on the Circuit.

“Women and men lie, numbers don’t,” Hawkins told WSOP officials when asked if he is the greatest WSOP Circuit player of all-time. “I don’t play for accolades. I play for money, to eat. I love [accolades], but I really play to eat.”

With the latest WSOP Circuit season winding down, Hawkins has already confirmed that he will be attending both the Cherokee and New Orleans stops in an attempt to win his eleventh gold ring.

Thanks to two others cashes, both of which were final table appearances, Reichard amassed 107.5 points, which was enough to give him the “Casino Championship” title at Horseshoe Council Bluffs. That means Reichard will join Hawkins at Harrah’s Cherokee in early August for the 2017 Global Casino Championship, which will offer a minimum $1 million prize pool and a WSOP gold bracelet.

Other notable winners at the WSOP Circuit Horseshoe Council Bluffs included Michael Hahn, who won his second ring in ten days by topping a field of 198 in Event #6: $365 NLH Six-Handed for $16,334.

“I just run really good here. I don’t know what it is,” Hinkle told WSOP officials. “This is what happens in Council Bluffs. I run too good here, I don’t lose all-ins.”