Mike Matusow had a great day on Sunday at the 2017 World Series of Poker. The Mouth made a final table, but even more exciting for him, it seemed, was the action taking place at another final table, where one of his picks in the annual $25k Fantasy Draft would ultimately take down the bracelet.

On Day 19 of the WSOP, bracelet battles inside the Rio were getting heated, as temperatures outside began to remind players of the oven-like conditions in which they choose to spend their summers. 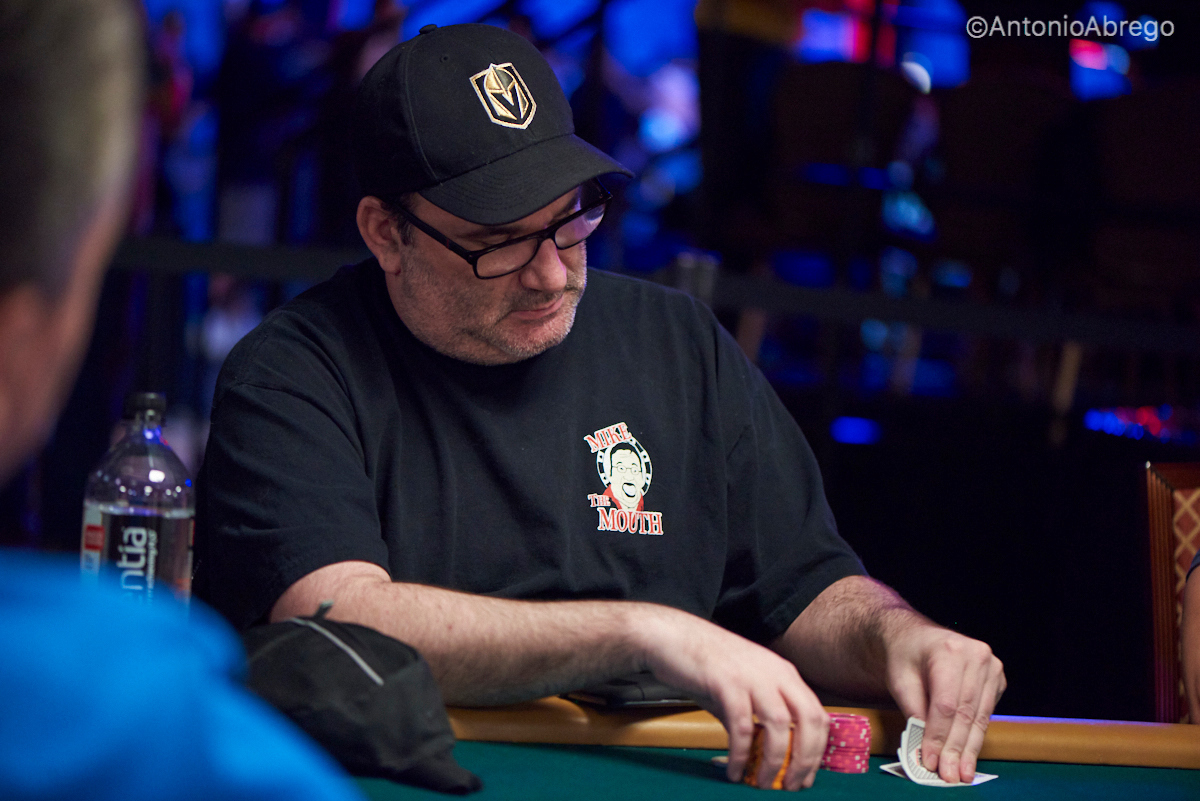 Mike Matusow, seen here playing his way toward the final table in $10k 2-7 Lowball Triple-Draw, is apparently a fan of himself, the Vegas Golden Knights, and Russian oligarchs who play poker. (Image: Antonio Abrego / PokerPhotoArchive.com)

Everyone knows Matusow loves him some President Donald Trump. But there is no evidence of collusion between Trump’s poker-world surrogate and a man named Vladimir from Russia whom The Mouth apparently thinks the world of.

It was hard to tell who was more ecstatic: the champion or The Mouth.

Matusow picked up Shchemelev on the cheap in the $25k Fantasy Draft. The Russian’s victory earned him some much-needed points.

Speaking of Trump supporters, actor James Woods is off to a strong start in Event #35, $1,000 Super Seniors No-Limit Hold’em, a tournament open only to those age 65 and up.

Day One of this event ended immediately after the money bubble burst. Every one still alive in this event is guaranteed $1,502. And Woods is in a strong position for a much bigger score.

He’ll enter Day Two as the 17th largest stack (73,600) out of 258 remaining players. In a recent interview with CardsChat, Woods said he isn’t out looking for work so he has more time to play poker.

The chip leader as the Super Seniors continues is Johnny Landreth (262,800). The winner will receive $259,230, which would make a nice payday even for a semi-retired actor who likes to poke at snowflakes.

Event #31, $1,000 Seniors No-Limit Hold’em Championship, is an event for those age 50 and up. Drawing a massive field with 5,389 players, after four days of play, the event is down to its final table of nine.

You can catch the final table action live on a 30-minute delay on PokerGO Monday starting at 12:30 pm PT.

It’s shaping up to be a solid Series for Faraz Jaka, aka the “homeless millionaire.” He already has two cashes including a 6th place finish. After Sunday, he’s the chip leader in Event #36, $5,000 No-Limit Hold’em 6-Handed.

His Day One accomplishment is even more impressive when you consider the caliber of his competition.

This isn’t the Colossus, after all, where every low-stakes grinder and recreational player in the area enters. Some of the best players in the world registered for this tournament.

Coming up on Monday is a pair of new tournaments at the 2017 WSOP.

Assuming things go according to plan, we’ll have another pair of bracelet winners to announce tomorrow.

Russian fellows. Did a very great job. I’m happy for them. Keep it up Russia!