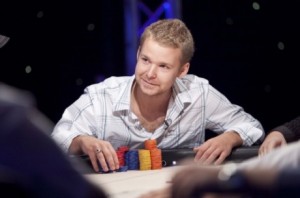 Headed into the final table, Matthew Lapossie was in sixth place at the 2014 Fallsview Poker Classic $5,000 Main Event at the World Poker tour. While the chip leader at the time, Jason James, held more than twice the number of chips Lapossie did, it didn’t stop him from going all the way. In fact, when the “official final table” (per the WPT’s format) started, Lapossie was in last place. Thanks to some incredible final table play, however, Lapossie deposed the competition and took home a top prize of $342,266.

Those that followed the tournament will remember that Lapossie was actually the Day 1 chip leader. Played at the Fallsview Casino Resort in Niagara Falls, Ontario in Canada, the tournament featured 383 entrants. While not much was known about Lapossie after Day 1, poker records indicated that his last official big tournament cash was back in 2009. The majority of his tournament winnings on record date back to a seventh-place finish at the 2009 European Poker Tour Barcelona Main Event. The sole win on his resume also dates back to 2009 in a $545 No Limit Hold’em event played at the L.A. Poker Classic at Commerce Casino. Going into Day 2, Lapossie held a whopping 417,400 in chips, with second place player Sylvain Siebert holding just 264,800.

It took more than four hours of play to go from seven players at the final table down to six. Going into the final table’s play, the chip stacks were as follows:

It was the table’s second shortest stack, Howie Leung that made the first exit on the 17th hand of final table play. He shoved with pocket eights but lost a coin flip against Dylan Wilkerson’s Big Slick. Shortly after that hand, Wilkerson won another race with Ace Queen against Josue Sauvageau, eliminating him in fifth place.

The next hand will live on in WPT lore for a long time. On the button, Wilkerson shoved, with both Lapossie and Spiro Mikrogianakis calling, creating a three-way all-in situation. Wilkerson showed Queen Ten, Mikrogianakis held pocket sixes, and Lapossie showed Ace King. The board blanked all players, but the river proved to be a tsunami-like King, giving Lapossie the win and sending Mikrogianakis to the rail.

Playing three-handed, Jason James three-bet shoved with Ace Seven, with Lapossie calling with Ace King. Lapossie held up with the better hand, and the tournament moved to heads-up play.

Clearly, Lapossie was running well at this final table, getting hands and having hands hold up throughout the night. Once he secured his big lead, he never looked back. On the last hand of the tournament, Dylan Wilkerson shoved for a little more than 2 million in chips with pocket fours. Lapossie called with Ace Five for another coin flip situation. The flop wasn’t kind to Wilkerson, who saw an Ace hit the board. With the turn and river blanking both players, Lapossie won with a better two pair and earned the title of Champion of the 2014 WPT Fallsview Poker Classic.

Nice win for him. Interesting to see a come back.