Matt Savage is one of the most respected and well-known poker tournament directors, but his latest creation has some questioning his sanity as he has proposed a tournament where sunglasses, cell phones, headphones and hoodies are banned in the playing area. 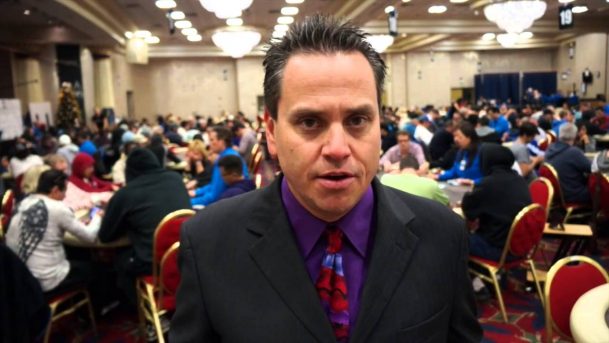 The event, called The Social Experiment, will be at the Commerce Casino during the California Poker Championships, April 28-May 14. The unique idea will be during the April 29, $350 NL Triple Stack.

“The #SocialExperiment is an attempt to create social interaction amongst players,” read a post on Twitter. “Cell phones, sunglasses, headphones, and hoods will only be allowed outside of the tournament area or on break.”

The head of the WSOP and other events, he has always been known for pushing the envelope. Earlier this year he received criticism for making Will Kassouf a bounty player in an event he ran.

Savage is hoping this gets players back to the roots of the game, when such accessories were rarely seen on players. Now it seems like every rounder has to be on his smartphone or donning dark sunglasses at a table.

Another area Savage is passionate about is a shot clock for slow players and he controversially instituted one at the WPT’s Tournament of Champions.

For this competition, penalties for violating the rules will start with a three-hand banishment, up to one rotation around the table for repeat offenders.

The idea for the event came from a friend and the poker director expanded on it. Part of it is serious, but he is definitely taking an irreverent tone on his Twitter account.

In announcing the event last Friday, he tweeted: “We will have 30,000 in chips for the $350 and provide complimentary ear plugs for the weak and anti social.”

The response to the plan has been mixed, but whatever side people are on, the opinions have been strong. Savage’s Twitter account is acting like a debate moderator on the topic.

There are plenty looking forward to The Social Experiment at Commerce Casino,” Savage tweeted. “I’m a slave to my phone and I would love to play this event.”

Brandon McPherson is not a fan and let it be known bluntly.

“This is the dumbest thing I’ve ever heard of,” he tweeted. “Not only pointless but counter to what the community wants.”

But Joe Patterson is a fan of it.

“That’s awesome,” Patterson tweeted. “You are going to take a lot of people out their game, for sure, love it.”

Some of the responses have been sarcastic, but Savage has a comeback for every one of them. One guy asked if service dogs were allowed to which he said, “Yes, and vegans too.”

Another said he needed his phone because his wife was pregnant and would be due at that time.

“If my wife was due I wouldn’t be playing a $350 tournament that day anyway,” he tweeted.

I think its a wonderful idea. Its a experiment folks. He’s trying it out. I like it and would love to try a tournament like that. Some players need all those things or some. Could throw them off.