Matt Savage admitted on Facebook that the unlimited re-entry craze he started in 2010 “was a mistake.” But the WPT Executive Tour Director shouldn’t shoulder the blame. Instead, he deserves credit for bringing innovation to the game, even though I, and many others, agree unlimited re-entry tournaments should be restricted to non-prestigious events. 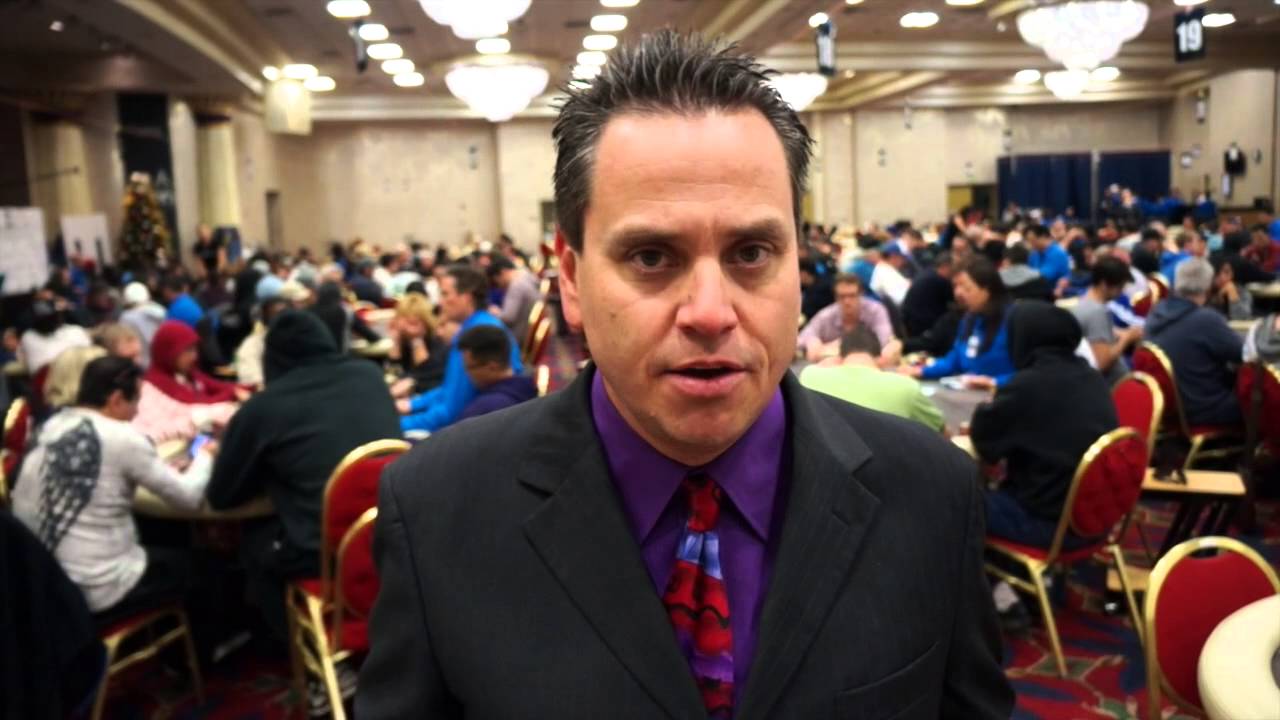 Matt Savage is taking heat for unlimited re-entry tournaments, but is he really the one to blame? (Image: wpt.com)

Alex Foxen recently won the WPT Five Diamond for $1.7 million, effectively wrapping up the GPI Player of the Year award for the second consecutive year. His title, despite an impressive performance at the final table, wasn’t without criticism.

Foxen took full advantage of the tournament’s unlimited re-entry format. He busted four times before building up a stack that stuck on his fifth buy-in. Many on Twitter took aim at a well-bankrolled player, such as Foxen, having an opportunity to buy-in so many times. They argue the high rollers have an unfair advantage with unlimited re-entry, especially in a $10,400 buy-in tournament such as the Five Diamond.

And they are correct, despite the denial of some poker players, who appear to be mostly high-stakes pros. But I also don’t think Matt Savage is to blame for the current state of tournament poker. Many others, including the players who speak out against unlimited re-entry, yet still re-enter tournaments (what’s up, Daniel Negreanu?) are more deserving of criticism.

Blame Negreanu, Not Savage or Foxen

Foxen and Dylan Linde won the past two WPT Five Diamond events. They each busted four times before winning their respective tournaments on their fifth bullets. Both talented pros took some heat for taking advantage of the rules they didn’t create.

Don’t hate the player, hate the game. Foxen and Linde played within the rules. They aren’t the ones spouting off on social media about how prestigious events, such as the Five Diamond, should use the freezeout format. Negreanu, on the other hand … he’s a different story.

Prior to the Five Diamond, Negreanu ripped unlimited re-entry. He even went so far as to say he’s considering firing just one bullet in the Five Diamond, and all 2020 tournaments. After busting on Day 1, he went home for the night … and then came back the next day to enter a second time. On his second bullet, he finished 29th place for $29,220. Way to stick to your guns, Daniel.

So, if you want to blame Savage, fine. I just think it’s silly considering that, as a long-time tournament director, his job is to give the customers what they want. If Negreanu, and others, continue re-buying, where is the incentive for the casino to eliminate unlimited re-entry? Supply and demand, folks.

Time for Negreanu to Help the Cause

For those opposed to unlimited re-entry, here’s how you bring about change: quit playing unlimited re-entry tournaments. Instead of ripping on Savage, Foxen, casino operators, and tournament directors for allowing this craze to take over tournament poker, do your talking with your wallet.

When Negreanu speaks out against unlimited re-entry and then fires two bullets in the WPT Five Diamond, it doesn’t help the cause. That’s like when politicians run on a campaign platform of lowering the national deficit, and then spend recklessly once elected.

Negreanu has the pull to influence change. He’s poker’s top ambassador and most popular player. But he isn’t solely responsible for minimizing these unlimited re-entry tournaments that are taking over poker. Other players hold some responsibility, including Dan Shak, who dislikes unlimited re-entry, but admits he still fires multiple bullets in certain events.

Yes run a poll will be overwhelming for no re-entry even I fire fire fire then hate myself:) even most of those that fire actually hate it. Changes the play and the game completely https://t.co/CVBpRz6Tlw

Are there Benefits to Unlimited Re-Entry?

Savage wrote on Facebook recently that he “made a mistake” when he pushed unlimited re-entry on the poker community in 2010. While it’s admirable that he’s owning up to the craze he created, it was only a matter of time before some other tournament director did the same thing. 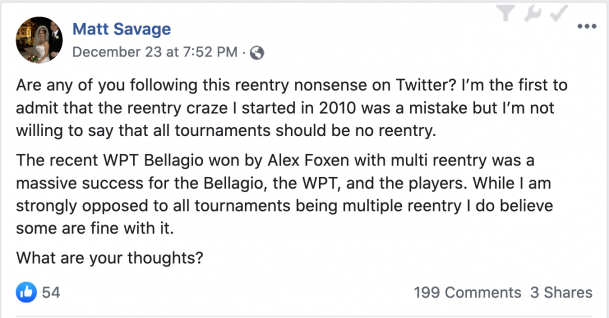 The main goal of every tournament operator is to ensure they turn a profit. As Seth Palansky, WSOP’s vice president of corporate communications, told me about unlimited re-entry, the WSOP listens to its customers. If the unlimited re-entry events weren’t highly successful, the WSOP would go back to the old days of freezeouts.

In some ways, Savage improved the game of poker with unlimited re-entry. His innovative mindset helped create the largest prize pools in low-stakes poker history. The 2019 WSOP Big 50, a $500 buy-in bracelet event, had a record 28,371 entries. Femi Fashakin took home $1,147,499 for winning the tournament. Think a player could win seven-figures for a $500 buy-in without numerous opportunities to re-enter? Not a chance.

Unlimited Re-Entry Has a Place, and it Isn’t the WPT Five Diamond

I don’t blame Savage for pushing unlimited re-entry on the poker community. Hindsight is always 20/20, and he couldn’t have envisioned the public outcry it would cause a decade later. But I also don’t agree with him on the 2019 WPT Five Diamond being a “massive success,” which he claimed on Facebook.

Sure, the $10,400 buy-in tournament had a record 1,035 entries – 605 of which were unique (429 re-buys). From an Executive Tour Director’s point of view, I can see how he’d consider that a success. But from a poker industry perspective, I respectfully disagree.

The WPT Five Diamond is arguably the most prestigious tournament on the World Poker Tour schedule each year. I’d go so far as to say, it’s one of the five or six most important annual poker tournaments in the world. You could argue it’s a poker “major.”

Tiger Woods won the PGA Tour’s prestigious Masters tournament in April. He didn’t get four mulligans before posting the top score. Alex Foxen, at the WPT Five Diamond, did.

Unlimited re-entry has a place. That place is the WSOP Big 50, non-prestigious high rollers where half the players are backed and swap action, and low-stakes tournaments at your local card room. Just keep that format away from the majors, and we’re good.