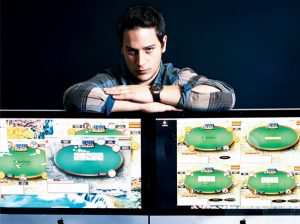 Poker pro Matt Marafioti, the high stakes poker pro who reportedly went missing in June, is back and feeling better than ever.

Back in July, a series of tweets by poker pro Randy Dorfman suggested that Marafioti had gone missing after a brief spell in Las Vegas. In town for the World Series of Poker (WSOP), Marafioti played a handful of events before leaving town with his credit card according to Dorfman.

“If anyone has seen Matt Marafioti please contact me. Has not been heard from since June & family is extremely worried. Plz rtwt,” tweeted Dorman at that time.

After a series of retweets and possible sightings, the issue went cold for everyone but Marafioti’s friends and family.

Fortunately, before the trail back to Marafioti could go too cold, the man himself popped up on YouTube to tell everyone that he was ok. Posting a video via his personal account, the Canadian refuted the suggestion that he had gone “missing,” and explained that he’d simply received a $65,000 advance on the sale of his house.

Using this money, Marafioti he said he’d gone on vacation.

“I’m enjoying my summer with friends, having fun. We went on a camping trip for a couple of weeks and it was really enjoyable,” said Marafioti.

Once he’d made his triumphant return, the temperamental player couldn’t help but take a few shots at his peers, as well as Dorfman.

A Need to Escape

Addressing some of the comments he’d received during his time in Vegas, Marafioti stated that he was happy to get away from things for a while.

“I find the poker community to be a very seedy, one-sided community,” he said in his YouTube segment.

He then went on to call Dorfman a “Jewish mobster” and not even a remote friend, which is strange, given that he was the one calling for the community to help find Marafioti. Later in the video, Marafioti refuted claims that he has a mental illness and even went on to suggest that there are people out there who are trying to put him in a mental home in order to kill him.

While it’s not clear if he was being serious, Marafioti did say that “they” would lock him away and “poison his food” before claiming that he “died of natural causes.”

Whether or not Marafioti is the target of an elaborate conspiracy involving hip-hop artist Drake is unclear, but what we do know is that the poker player is still alive and well.

To hear Marafioti’s full explanation, check out his video below. Why he shot it in upside-down mode, we cannot say:

He’s unstable, nothing else to really say

This guy has a bad case of the gays

Matt is completely out of his mind. Watch the video. Mental illness is sad. Can’t anybody help him? He has been in the poker community for a long time, and nobody will help him?