Doug Polk says he doesn’t “feel like playing” poker this summer, but he does feel like playing games with Daniel Negreanu. Polk took his trolling skills to new heights this week — literally — by purchasing billboard space outside the Rio to promote a website that mock’s Negreanu’s claim that “more rake is better.” 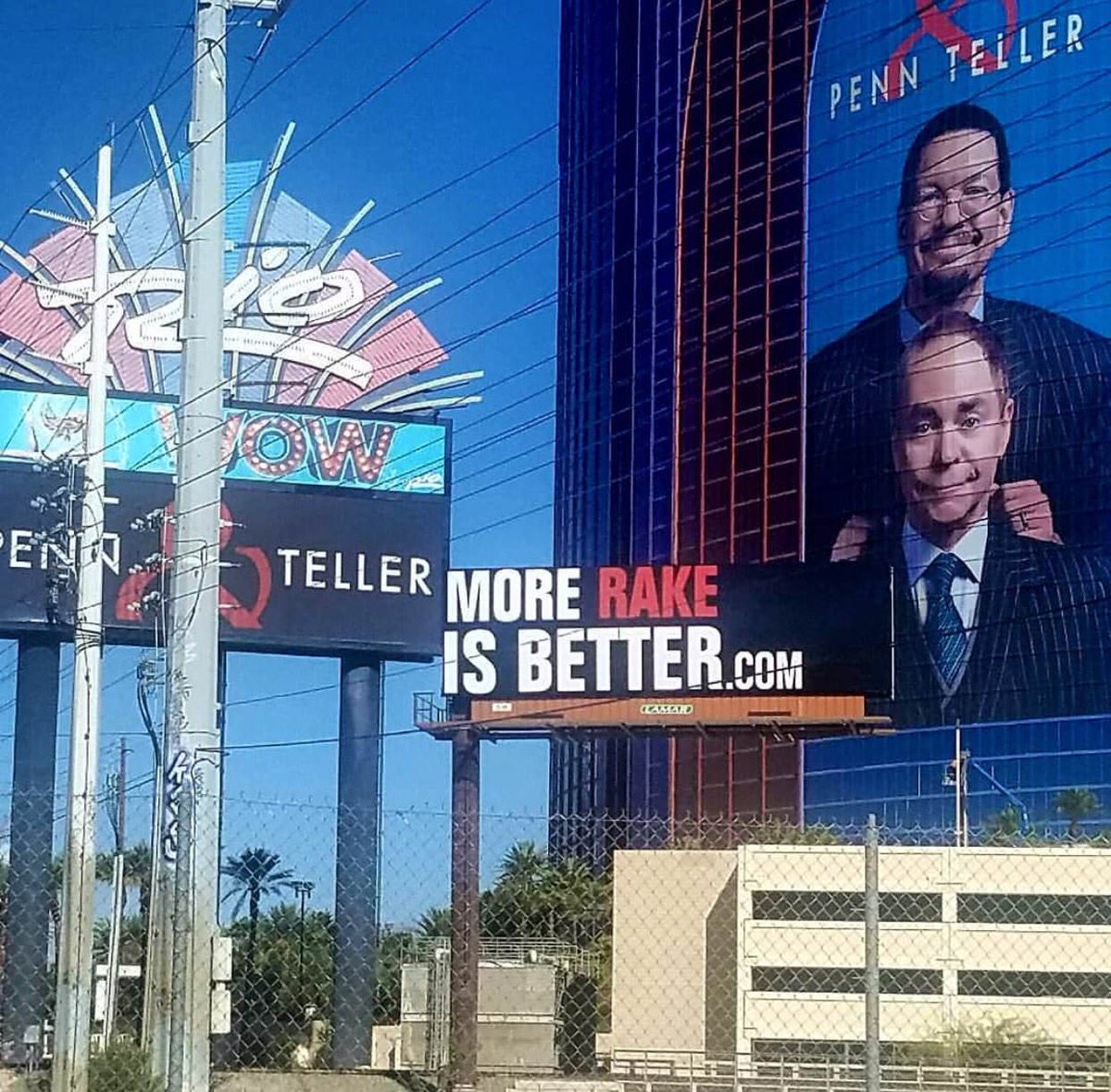 Doug Polk’s billboard outside the Rio is designed to to troll Daniel Negreanu for continuing to promote PokerStars, a brand he believes has turned on players and is bad for the game. (Image: Pamela Maldenado/Twitter)

Arguably masterful trolling, in an ongoing poker feud. The billboard that appeared Friday encouraged people to visit MoreRakeIsBetter.com, continuing a dig that began a week earlier at the Super High Roller Bowl.

On Thursdsay, Polk, a three-time bracelet winner, disappointed his fans by announcing that he might be MIA for the 2018 WSOP. But he made up for it on Friday, with a billboard that assures even if he doesn’t show up at the Rio, he’s still going to be there.

Not planning on playing much, if any, poker this summer

Haven't been enjoying playing lately. Most of the poker I've played recently I played because I felt I 'should' play, or I don't want to let down my fans that want to see me play, but at the moment I dont feel like playing 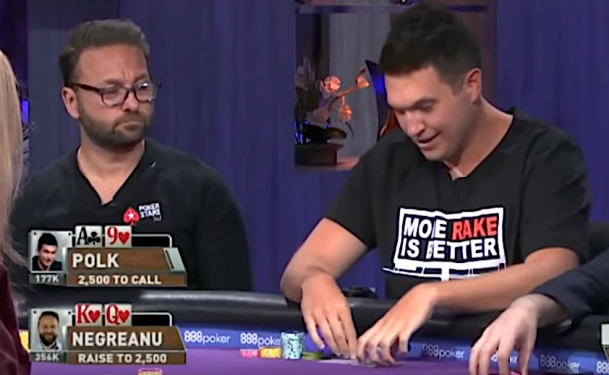 Doug Polk said little to Negreanu at last week’s Super High Roller Bowl until he took off his button-down shirt, hinting at his coming message on a billboard. (Image: YouTube/JoeIngram1)

It’s no secret that Polk has made needling Negreanu one of his favorite bits. And being blocked by @RealKidPoker on Twitter wasn’t going to stop him.

Last week, the YouTube personality and founder of Upswing Poker played in the $300,000 buy-in Super High Roller Bowl, and ended up on Day One seated next to Negreanu. The two barely said a word, but did tangle in a few hands, and at one point Polk began to disrobe, revealing a t-shirt that read “More Rake is Better.”

(On second look we saw the shirt showed the message on a billboard.)

But for all the “lols” Polk got on social media, Negreanu seemed to get the last laugh — bursting into hysterics when Polk went bust, and then going on to finish runner-up and win $3 million.

For Negreanu, the Polk poking was all just “a sideshow.”

The quote “more rake is better” dates back to a 2016 comment Negreanu made after PokerStars announced a cash game rake increase.

“There’s a lot of games where the rake is really high, and it keeps pros away,” he said at the time. “But overall, for the game, it’s actually better because pros aren’t playing.”

Polk, who admittedly despises PokerStars, took exception to that sentiment and has since bashed Negreanu repeatedly for making what he considers an outlandish statement.

But he also admitted on Twitter he had another purpose in mind: he did it for the “lol’s.”

Nice billboard! I wonder how much that cost?

I wonder how long he’s renting it out? :p

Being in the Outdoor Media business for over 25 years, it all comes down to number of impressions and cost per 1000 (CPM). Without seeing the stats, and depending on placement, I would venture to say it costs no more than 8-10k for a month. Not the best investment because it doesn’t explain much and if you’re not a poker player, you have no idea what the hell this is. I think it is hilarious though. Way to go Doug!!

I believe that More Rake is Better … … … for the house. Just take a good look around when you’re in Los Vegas. All that you see was built on the rake. And, all smart gamblers know, if you want to win BIG, become the house. Otherwise, “you pays your moneys, you takes your chances.”