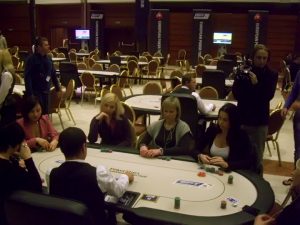 European Poker Tour in Prague is set to kick off with an incredible 97 events scheduled to begin this weekend. (Image: Hanasoljan.com)

The European Poker Tour has hosted numerous major events over the years, but none bigger than what is set to take place in Prague, Czech Republic starting this weekend.

Coming from the Hilton Hotel Prague, the upcoming EPT festival will include a whopping 97 tournaments over the course of 12 days.

The Hilton will be the hottest spot in town during the poker series. 185 poker tables are to be set up at the hotel, with some of the world’s top players stopping by to attempt to win more money than the average family makes in a decade.

This isn’t going to be just another standard poker series. EPT Prague offers some unique tournaments, including a €100 Deuces Wild “Quack Quack Half a Rack” event. When a player picks up pocket deuces, a €50 bonus is awarded.

The most beneficial event occurs December 10. That’s when the EPT hosts a €150 charity tournament to benefit Right to Play, an organization that helps children survive poverty and war stricken environments.

Of course, the main attraction is the Main Event which is expected to bring in hundreds of competitors. The buy-in is €1,100.

EPT Player of the Year Race

EPT Prague is the third stop of the year on the European Poker Tour, with three to follow. Through two stops, Mike McDonald leads the Player of the Year standings with 2,046.09 points. Byron Kaverman is right on his heels, trailing by less than 200 points.

This is the European Poker Tour’s 12th season.

Poker player John Duthie, founded the EPT back in 2004 during the heart of the poker boom. Duthie and his organization capitalized on the game’s massive growth, attracting players from all over the world to his early events.

The popularity of poker has declined in recent years, but the EPT continues to thrive. Now in its 12th season, EPT has become the top European poker event.

Heading into EPT Prague, the United Kingdom holds the lead for most EPT tournament wins with 17. But the United States is just one victory away from breaking even. EPT tournaments have been won by players from 26 different countries.

Two months prior to his Poker Hall of Fame induction, Juanda conquered the EPT Barcelona crown, winning €1,022,593. It was the cherry on top for his Hall of Fame career.