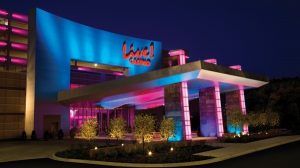 The award, dished out by the Annapolis & Anne Arundel County Chamber of Commerce is in recognition of the casino for its various philanthropic projects and service to the local communities.

Maryland Live! has only been in operation for three years, but the casino, part of The Cordish Companies, insists on its employees engaging in various volunteer schemes and programs in the area.

Blood drives for the Red Cross and food bank deliveries are just part of the duties employees from the casino undertake each year.

Zed Smith, COO of The Cordish Companies, said in a statement:

“On behalf of the thousands of team members at Maryland Live! and at Cordish across the country, we are incredibly proud and humbled to have been recognized with such a prestigious and meaningful award that speaks to the core principles of our company – philanthropy, commitment to public service and giving back to communities.”

Maryland Live! Casino is an affiliate of The Cordish Companies, a firm which dates back to 1910 and specializes in real estate development and gaming.

Maryland Live! opened in June 2012 at a cost of $500 million and already boasts 14 million visitors a year.

The casino boasts over 4,500 slots and table games and a poker room fitted with 52 tables. It won ‘Project of the Year’ by the Baltimore Business Journal back in March 2013.

The casino’s rise to prominence is remarkable given the short space of time it has been open. But the World Poker Tour obviously spotted a rising star when it awarded the casino a host spot on the latest season of the WPT.

The first ever WPT Maryland Live! concluded this week, with 337 runners turning out for the $3,300 No Limit Hold’em tournament.

Ultimately, it was not to be for former WSOP World Champion, Greg Merson, who bust the final table in fourth place. Aaron Mermelstein made history to become Maryland’s first WPT champ for a payday worth around $250,000.

“Maryland Live! has been the recipient of numerous awards over the years, but none give me greater pleasure that the recognition we receive for our community outreach,” he said.

“I’m proud of our team, and proud to be part of a company that makes community service and involvement a key component of our corporate culture. It’s important to us to serve as an example to other regional businesses and encourage them to make a difference in their own communities.”

Congratulations to Maryland Live! Casino. They truly deserve this award. More blessing and good works for your upcoming years.