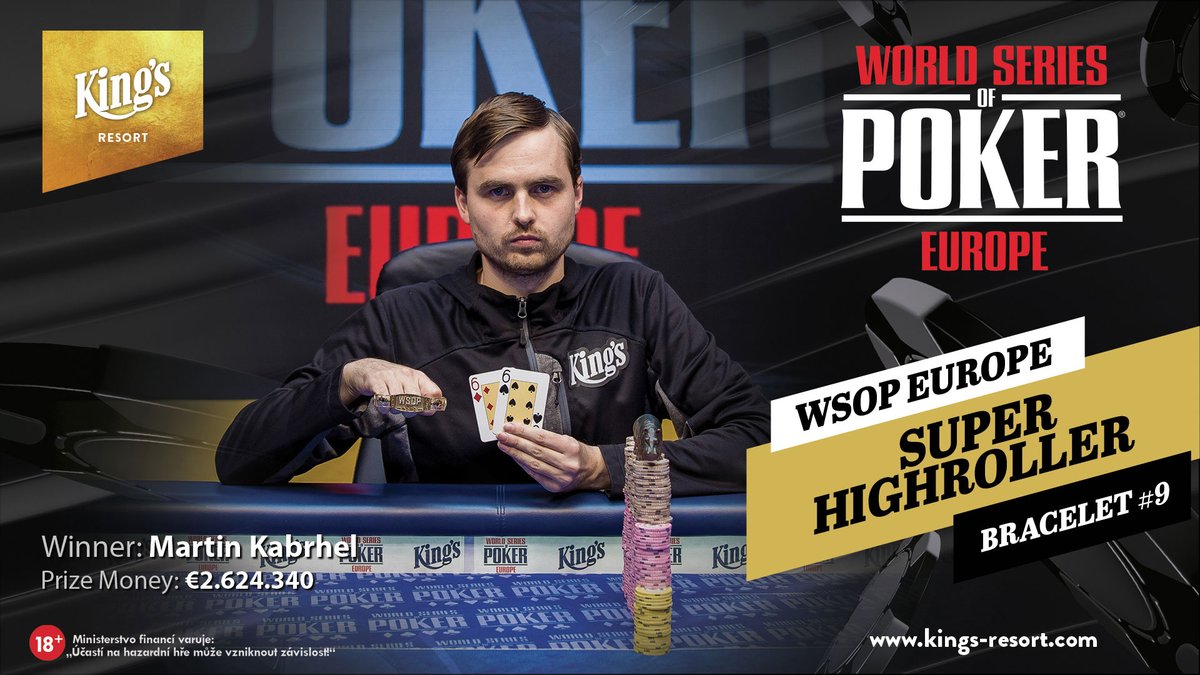 Also at the European World Series of Poker this weekend, the €10,350 Main Event, the series finale, got underway. Some big name pros such as Alex Foxen bagged big stacks on Day 1A and 1B.

The Main Event is the final of 88 bracelet events this year. There were 78 in Las Vegas at the Rio over the summer and another 10 this month in Rozvadov at King’s Casino.

This past weekend, he was playing for slightly higher (understatement) stakes against slightly tougher (another understatement) competition. The €100,000 Super High Roller had 95 entries and 15 players cashed. Kabrhel was the only player from the host casino’s country to finish in the money.

Players from 11 countries cashed in this high roller event, including runner-up David Peters (€1.6 million) who hails from the United States.

The tournament ended like many others – with a race. Peters got it all-in with A-K against his opponent’s pocket sixes. A six appeared in the window, putting an end to the three-day high stakes event.

And Now for the Main Event

With the super high roller concluding, that leaves just one more bracelet event of 2018. The 88th and final bracelet even of the year is the €10,350 Main Event, which kicked off on Saturday.

Day One saw 341 entries combined over two sessions (140 on Day 1A and 201 on Day 1B) take a seat. Registration remained open until the end of level 12 on Monday. We’ll have a final tally for you tomorrow.

Marco Slacanac from Germany bagged the largest Day One stack (544,300). Adrian Mateos, one of the top high rollers in the world, finished with the biggest Day 1B stack (393,700).

after reading the article , i can see that martin didn t do only one or two great things , his career is full of big wins . he deserves a trophy for what he did . Bravo