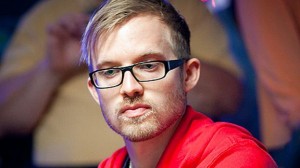 Sweden’s Martin Jacobson put in one of the great World Series of Poker final table performances of all time, battling back from a short stack on Monday to become the 2014 Main Event champion. Jacobson defeated Felix Stephensen in heads-up play in order to win his first WSOP bracelet and a $10 million payday.

Jacobson came into the final table in second place, holding 64.75 million chips, or almost exactly one-third of all chips in play. He built his stack by knocking out Jorryt van Hoof at the three-hour mark, then extended his chip lead time and time again against Stephensen in order to put himself in commanding position.

Then, on the 328th hand of the final table, Stephensen raised from the button to 3.5 million chips. Jacobson moved all-in, and Stephensen agreed to put his tournament on the line by calling off his remaining 28.3 million in chips. Stephensen’s call was understandable, as he held the A9 of hearts. But Jacobson held pocket tens, always a monster and especially strong in heads-up play.

Jacobson’s rail could smell the victory, chanting “ten for ten!” from the rail. Their call was heard by the deck, as a 3-9-T flop put Jacobson in a commanding position. When a king came on the turn, the tournament was over: Jacobson had clinched victory even before the four of clubs hit on the river.

Stephensen, who hails from Norway but now lives in London, took home $5,147,911 for his runner-up finish.

While Jacobson dominated play on Tuesday, he wasn’t the leader for most of the past two days. Jorryt van Hoof entered the final table as the chip leader, and for most of Monday’s play he only extended that lead. He came into the final session with over 89 million chips, making him the odds-on favorite to take down the 2014 championship.

But it was not to be. Van Hoof lost most of his stack over the first three hours of play, and when he finally moved in with A5, Jacobson showed up with AT. Both players made pairs on the 5-T-2 flop, but Jacobson remained ahead. With no further improvements coming for either player, that spelled the end of van Hoof’s excellent run.

Attentive fans may have noticed that van Hoof wore sunglasses for the first time on Tuesday. But he never felt comfortable, he said, and if he makes any other major tournament appearances, you shouldn’t expect to see them again.

Martin Jacobson’s win makes him the first player from Sweden ever to win the Main Event title. It comes in an already storied career for the Swede, who had won nearly $5 million in live tournament play before his Main Event earnings this year.

Jacobson was one of the chip leaders nearly from the beginning of the tournament, taking the top stack out of Day 1A and constantly being near the leaderboard throughout. That held up until the final table, where Jacobson entered in 8th place and really never spent any time among the leaders until late in Monday’s session. But after about 16 hours of play, it was the Swede who held all the chips, having played virtually flawless poker over the course of the final two days.