This past weekend, 56-year-old business development manager Mark Wadekamper topped a field of 475 entrants to win the MSPT Canterbury Park $1,100 Main Event for $110,220. It was the largest major poker tournament ever held in Minnesota, and reigning champ Jon Kim came very close to defending his title, but ultimately finished in second place. 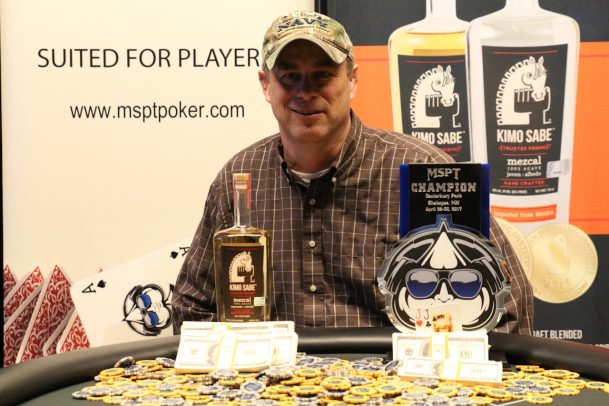 Mark Wadekamper, who won the MSPT Canterbury Park for $110,220, plans to use some of that money to help his daughter pay off her student loans. (Image: MSPT)

Back in December, Kim topped a field of 464 entrants, which at the time was the second-largest poker major ever held in the “Land of 10,000 Lakes,” to win the MSPT Canterbury Park for $107,659. He returned to fight for his title, after winning a $250 satellite to boot, and nearly replicated Carl Carodenuto’s remarkable feat of going back-to-back at Canterbury Park. Unfortunately for Kim, he faced an uphill battle when it was down to the final two.

Prior to the win, Wadekamper’s previous best cash was $9,600 for finishing fifth in the 2009 Heartland Poker Tour Walker. The native Minnesotan, who only plays for fun, doesn’t expect the money to change his life much. In fact, he was back at his 9-5 job the very next morning.

“I’ll pay taxes and probably help pay my daughter’s student loans,” he said, when asked what he’ll do with his six-figure payday.

The tournament drew some stiff competition, including 2004 World Series of Poker Main Event champ Greg Raymer (who failed to cash) and professional footballer Bernando Anor (24th for $3,444). Also at the felt were Day 1B chip leader Mike Ross (20th for $3,444), and three-time MSPT champ Carl Carodenuto (14th for $5,970).

At the final table, it looked as if Day 1B chip leader Loki Abboud would finish at the last man standing. He notched three knockouts early, but with four players left, a game-changing hand took place. It happened when Abboud slow-played pocket kings against Mark Wadekamper, who flopped the top pair of nines. The chips ended up going in on the turn, and then Wadekamper hit a miracle two outer 9 on the river for the 4.6-million chip pot.

Had Abboud, who finished sixth the last time the MSPT was in town, avoided the bad beat, he’d have held 80 percent of the chips in play. Instead, he got his leftover stacks in with seven-deuce offsuit (officially the worst starting hand in the game) and was finished off by Wadekamper’s pocket eights.

“I was surprised,” Wadekamper said, when asked about the odd hand. “I was expecting to be done, to go cash out and get something to eat. That was a big one.”

Season 8 of the MSPT continues this weekend, with the first-ever $350 Regional Event at Grand Falls Casino, which is situated just outside Sioux Falls, South Dakota. The next $1,100 Main Event, a $300,000 guarantee, will take place May 18-21 at FireKeepers Casino in Battle Creek, Michigan.