Less than a year removed from her first career seven-figure score, Maria Lampropulos, an Argentinian pro, took down the 2018 PCA Main Event for nearly $1.1 million at the Atlantis Resort in the Bahamas. 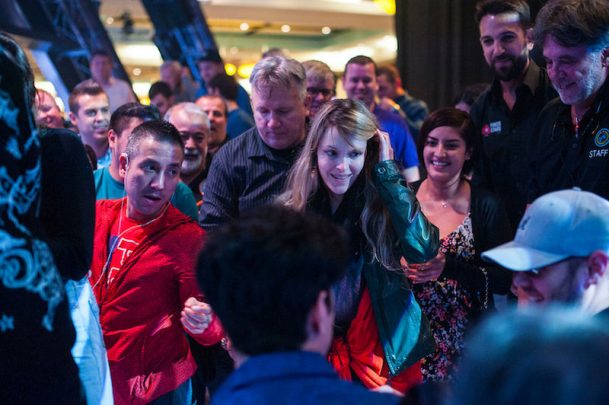 Maria Lampropulos (hand in hair) was the Main Event winner on Sunday at the 2018 PCA in the Bahamas. (Image: PokerStars.com )

On the same day, and in the same venue, Christopher Kruk shipped the $25,000 High Roller for $836,350, capping off what was an exciting series at the 14th annual PokerStars Caribbean Adventure.

“I am very proud,” she said after brushing off a talented Shawn Buchanan to win the title. “Every woman here: dealers, floor. Every woman is happy for me, and I’m grateful for that.”

She had to earn the victory, and not just by catching cards. The final table was stacked with pros who are used to playing for massive dough, including Buchanan who, after scoring $672,960 for 2nd place on Sunday, now has over $6.7 million in lifetime live tournament winnings.

Koray Aldemir (3rd) and Adrian Mateos (4th) have cashed for $20 million in their tournament careers.

Lampropulos is no stranger to the winning circle herself, of course. Last April, she outlasted 1,204 players in a $5,300 No-Limit Hold’em event at the partypoker MILLIONS Live series for $1,255,004. On Sunday, she was the last person standing in a tournament that began with 582 players.

Sunday’s final table was quite entertaining, with the chip lead shifting around the table numerous times. Mateos began the day with the largest stack, but it didn’t take Lampropulos long before jumping out in front.

And then she just as quickly squandered that lead back to Buchanan, who eventually gave way to Aldemir as the chip leader. But it was the only woman at the final table who closed the deal at the end of the day.

Christopher Kruk was the second big winner on Sunday in the Bahamas, after taking down the three-day $25,000 High-Roller for $836,350, his first major poker title.

The Canadian beat a field of 144 tough-to-beat players that included the likes of Justin Bonomo (4th), Daniel Negreanu (9th), and Isaac Haxton (15th).

Wow!This is an epic moment,I think every women in that casino were cheering for Maria and they couldnt believe what happened.I see so many amazed faces on the photo!!!