Senator Marco Rubio (R-Florida) is out of the GOP presidential race as of last night, which means American poker players now have one less anti-iGaming advocate to worry about during this year’s election. 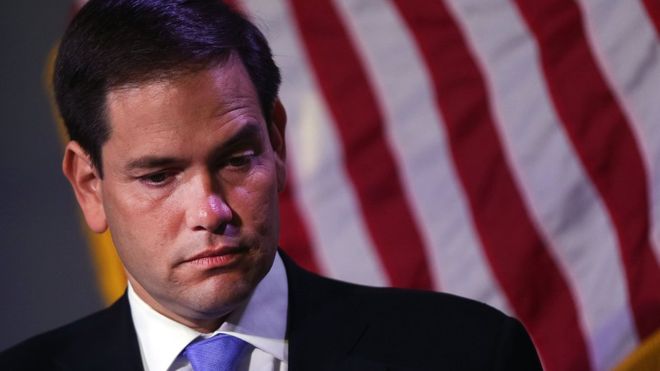 All over but the shouting: with Senator Marco Rubio (R-Florida) out of the US presidential race, any chance for support for RAWA continues to wane. (Image: Getty)

Rubio famously joined forces with Sheldon Adelson to co-sponsor the Restoration of America’s Wire Act (RAWA), a bill that would outlaw all forms of online gaming in the US.

Driven largely by Adelson’s adamant disdain for the all things Internet gaming, RAWA never really gained any traction in Congress. But with Rubio pushing for the top job at the White House, its threat quietly lurked nonetheless.

While Rubio may not have been as anti-online poker as some RAWA supporters (he told the Las Vegas Review-Journal in 2015 that its “element of skill” distinguished it from games such as slots), the fact remained that he was backed by Adelson and was actively pushing a piece of legislation that could have ended iGaming in the US.

But after losing the Florida primary to Donald Trump, Rubio officially announced his exit from the race.

First to pick up on the news was Rich Muny of the Poker Players Alliance. A leading voice against RAWA and an advocate for regulated online poker in the US, Muny has been vocal on his social media account throughout Rubio’s campaign.

After news of Rubio’s exit filtered through the community, the next question American players began asking was about Donald Trump’s position on online poker.

With his lead in the Republican nominee race growing by the day (he now has 621 delegates while his nearest rival Cruz has 396), it’s looking increasingly likely that Trump will face off against the Democratic winner (almost certainly Hillary Clinton) for the presidency later this year.

Although he hasn’t moved all-in with his support of online poker, Trump has stated that the US is “missing out as usual” when it comes to regulating and, therefore, profiting from the industry.

Is Adelson Supporting Trump? Does it Matter?

Alongside the news that Rubio is bowing out of the presidential race, it also emerged that Sheldon Adelson might be now supporting the billionaire candidate.

Although he didn’t specifically back Trump, he did appear to be at peace with the idea of Trump becoming president.

“Trump is a businessman. I am a businessman. He employs a lot of people. I employed 50,000 people. Why not,” he said during a gala dinner for former New York Mayor Rudy Giuliani.

Unlike other GOP candidates, Trump has refused to take any donations from the likes of Adelson. However, the billionaire still has a lot of influence over certain Republicans and that could mean he’s able to push the issue of RAWA to Trump if he makes it to the White House.

asides from poker, trump is very dangerous person that we are sure will polarized the USA to a point of Civil War. he has attack women, blacks, Hispanics, Jews, the pope, disabled people and in general all that USA is supposed to stand for.