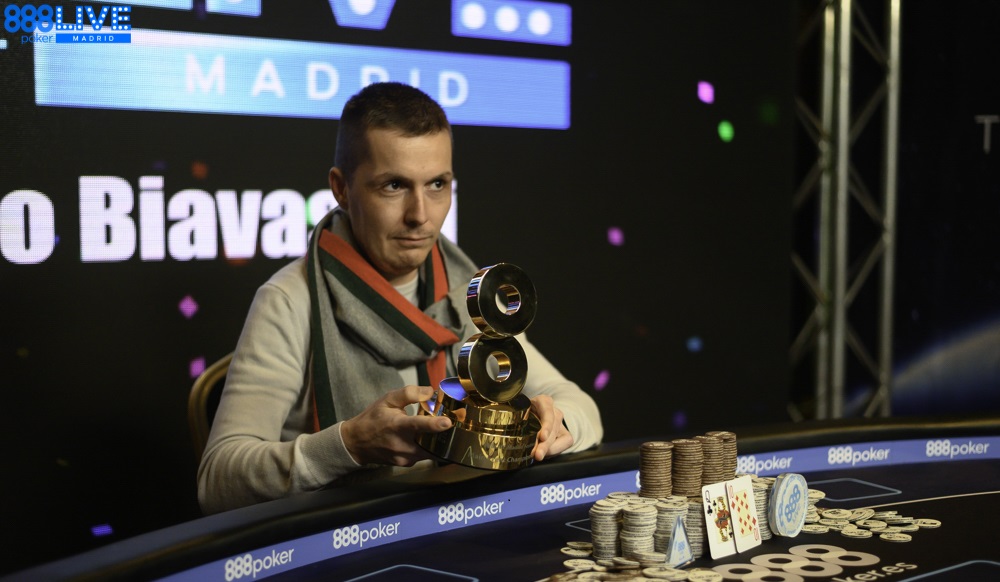 With players picking up titles in Australia and UK since the start of 2020, another batch of hopefuls took the felt last week, this time at Madrid’s Casino Gran Via.

Running from Jan. 30 through Feb. 3, the event attracted 1,067 entrants who were all competing for the title and first-place money worth more than $166,000. When the masses had dispersed and the betting was over, satellite qualifier Biavaschi stood victorious.

Prior to the event, the Italian had $13,404 in live tournament earnings. However, after parlaying a €100/$110 satellite ticket into an outright win, his lifetime winnings have increased more than 10-fold.

At the start of the final day, Biavaschi faced an uphill battle. With the €888/$977 event attracting some of Europe’s finest, the final table became a war of attrition.

By the time just nine players remained, almost 10 hours had passed. With the small matter of an 888poker Live title, a WSOP package and $166,353 up for grabs, no one was willing to submit to fatigue.

In the end, it took six hours for Biavaschi to come through the final table and secure his first live title. Along with second-place finisher Daniyar Aubakirov, Biavaschi assumed the role of judge, jury, and executioner.

Biavaschi was back on the attack a few rounds later, eliminating Pablo Paez before Aubakirov sent David Gonzalez Delgado home in third.

Heads-up, only one executioner could survive. Aubakirov struck the first blow, but couldn’t find a kill shot. That proved to be costly, as Biavaschi battled back over the course of an hour.

As the final day edged toward the 15-hour mark, Biavaschi finally got it done with Q♣T♦. Battling back from the brink to take the lead, he called Aubakirov’s final push.

Although Biavaschi’s Q♣T♦ was trailing Aubakirov’s K♣2♥ preflop, things changed quickly. With the final board showing Q♥T♣8♣2♦5♦, Biavaschi raked in the pot and secured a memorable victory.

Biavaschi said he was “very lucky,” and overjoyed with the result. In addition to turning his satellite ticket into a $166,353 payday, Biavaschi will join 888poker at the 2020 WSOP in Las Vegas for another shot at glory.