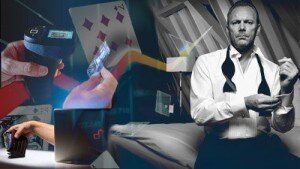 Marcel Luske hopes the poker industry embraces his company’s unique identification system in order to crackdown on fraud in the game. (Image: calvinayre.com)

Marcel Luske is stepping away from the poker table to tackle a bet he deems more favorable in that of security and fraud prevention.

The former PokerStars pro announced this week his new company Fortified-ID Holdings has developed the world’s first and only personal identification card system that features a unique fingerprint that is impossible to clone.

According to the company’s website, “nonClonableIDTM technology (nCID)” creates labels and tags with a matchless digital fingerprint on each user’s card.

Scanners are then used to authenticate the nCID tags, immediately allowing the party inspecting the card to determine the person’s identity.

Luske claims the compact identifiers make them ideal for everything from poker registration to acting as a passport for international travel.

The Big Business of Fraud

The International Chamber of Commerce estimates that more than two percent of the world’s economy is based in fraud, a number totaling $1.7 trillion in illegal goods and services.

With that colossal number in mind, Luske’s business seems to satisfy a sector in desperate need of solutions. When it comes to poker, casinos and event operators are going to great lengths to prevent scammers from infiltrating their tables.

Luske thinks his product could help drastically cut down those long entry lines at bigger events like the World Series of Poker.

Tournament organizers could quickly process entrant information and even accept payment through nCID according to the Dutchman. The product could also be applied to online events, allowing Internet vendors to scan a player’s card remotely.

Counterfeiting has plagued every industry, but poker has long been the target of fraudulent activities, and recently the game has seen more than its fair share of high-profile events.

Last January, Christian Lusardi had the not-so-bright idea of using counterfeit chips at the Borgata Winter Open in Atlantic City. After he was suspected of introducing fake chips into the tournament multiple times, authorities nailed Lusardi when he tried to flush the chips down the toilet of his hotel room, ultimately clogging the pipes.

In November of 2014, Navy Rear Admiral Timothy Giardina made his own fake $500 poker chips in a desperate measure to support his gambling habit. Investigators discovered Giardina’s DNA on the underside of a sticker that altered $1 poker chips into $500 chips. Records showed that the serviceman spent an average of 15 hours a week at the Horseshoe Casino in Iowa. The former commander of the US nuclear forces, Giardina’s actions were nothing short of a bombshell.

Poker fraud isn’t confined to live play. In fact, it runs even more rampant online. In December of 2013, two poker pros in Finland notified authorities that their laptops had been infected with a Trojan horse.

At some point in time, a con artist installed the program, giving him or her the ability to monitor everything on the computers.

Last April, it was discovered that Sweden’s national gambling company was the victim of fraud between 2007 and 2011. During that time, hackers obtained large amounts of personal and financial data.

Then in August, authorities in Denmark revealed a high-stakes player was using another Trojan horse program to gain access to his opponents systems, providing direct contact to seeing their cards during the game.

Great man, great player and great idea. To bad he left the tables for a while. Would love to see him making a live final table. But if he could make poker saver, that would be great!

Now what about solutions to protect online players?