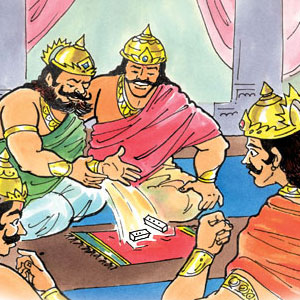 To pay off his gambling debt a man in India, according to multiple media outlets, has promised his daughter’s hand in marriage.

The next time you take a bad beat playing poker or go on a gross losing streak at your favorite casino game, consider the luck of a 13-year-old Indian girl who was literally gambled away by her father. While arranged marriages are extremely rare in Western society, they are commonplace in other parts of the world. To pay off his gambling debt a man in India, according to multiple media outlets, has promised his daughter’s hand in marriage. Considering the international crisis surrounding human trafficking, the story has reached all parts of the world.

Local news outlets in India’s West Bengal Malda area have reported that a man from the village known as Krishnapur-Buritala lost everything he had during a massive gambling session of “Mahabharata” (a dice game) against a neighbor earlier in December 2013. He lost so much during the session he felt that the only way to recoup his losses was to wager his daughter’s hand in marriage to a man more than twice her age.

Parimal Mandal, the man who just might be named the worst parental figure of 2013, made the wager with the blessing of the village’s local government. It was reported that a crowd had even gathered once word of the wager had been made, without any protest from the audience. The same reports stated that Mandal had already lost land he owned in previous gambling sessions.

Since being won in the bet, the young girl stopped attending school where she had received high marks for being a good student. The gambling match, in fact, where she was won was held while she was in class. There is, however, some hope for the young girl just yet, as the government has sent a team to the village to get more details about the incident and potentially prevent the marriage from taking place.

While child marriage in India is an illegal act, the promise made between families can be binding. The local district’s social welfare officer has been made aware of the situation and members of the NGO Childline organization have been alerted to lend their support as well.

While there might be some encouraging news that organizations are trying to step in to prevent the marriage, according to an Indian news outlet, the two families have already entered into negotiations regarding the marriage with a potential wedding date coming as soon as January 22, 2014. The father, when interviewed about the incident, simply replied to reports by saying, “I’ll do whatever is best for my daughter. What’s your business?”

The girl, in eight grade, has no rights to protest against the marriage, or being wagered on by her father.

Now this is something you don’t hear everyday

That man was gambling addict. A NGO has taken responsibility of the girl.