Day 1C of the 2019 WSOP Main Event was interesting, to say the least. Two players were disqualified within a few hours, including an unidentified, presumably intoxicated man who exposed himself to the table during an all-in bet and then proceeded to throw his shoe at the dealer. 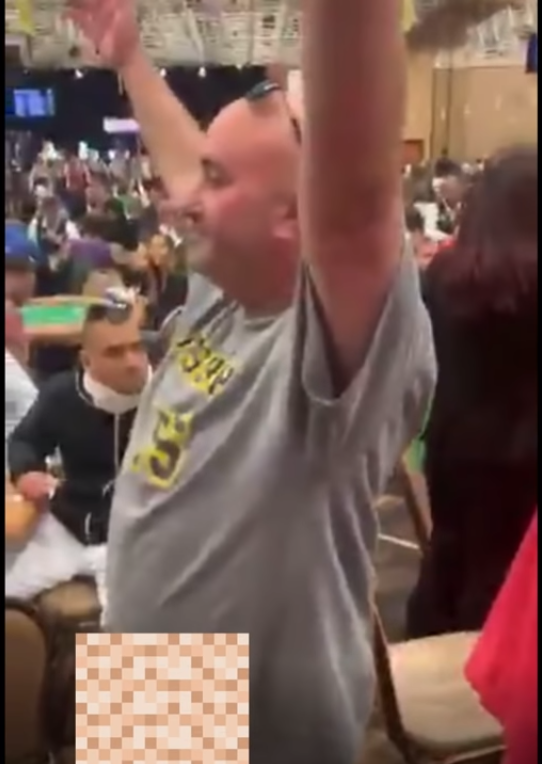 Despite all the craziness, the world championship of poker is running quite smoothly. With over 8,000 entries and registration still open until the start of Day Two, this year’s Main Event is guaranteed to at least become the second largest in its 50-year history.

The 2018 Main Event had 7,874 entries, previously the second biggest behind the 2006 edition, the year Jamie Gold won $12 million, which had 8,773. Day Two kicks off at 11 am PT on Saturday and then Day 2B at the same time on Sunday. Players can still buy-in so the prize pool and final tallies won’t be released until registration closes.

Unfathomable Behavior at the Poker Table

During the first hour of Friday’s session, an unidentified player was disqualified from the WSOP Main Event for apparently stealing chips from his neighbor. That was an uneventful incident compared to the second player who was booted from the tournament on the same day.

Another unidentified man moved all-in and then proceeded to stand up as he waited for his opponent to make a decision. What happened next might be the strangest and most unbelievable thing you’ll ever see at a poker table. But, alas, we have video evidence to prove it’s true.

The presumably intoxicated and possibly troubled man turned his back to the table and dropped his shorts, exposing his genitalia to everyone in the Pavilion room at the Rio. Moments later, he took off his shoe and threw it directly at the dealer. Poker player Scott Davies shared the video of the incident on Twitter.

Uhhhhhh what is going on at the #WSOP main event??? Player shoves blind, drops his pants, then throws his shoe on the table ? ? ?(video via @blattsmullet) pic.twitter.com/oHGk5pjlnJ

Who knew there was a full moon in Las Vegas on Friday?

Crazy incidents such as above can put a damper on an otherwise great poker event. But we won’t let that happen. The 2019 WSOP Main Event, despite a few shenanigans, is off to an exciting start.

More than 8,000 players have already registered, once again proving that the game of poker is on the upswing. Phil Ivey had a memorable exit from the world championship event on Friday. He lasted only an hour after risking his entire tournament life on a coin flip.

Day 2AB, which combines the players from Day 1A and B, begins at 11 pm PT on Saturday. The Day 1C holdovers will come back at the same time on Sunday. There are over 4,900 players left in the field with many more still to register.

What a dick! Literally!