Paul Phua, the Malaysian businessman and high stakes poker player, walked free from a US court last summer. That was after having had his case by the feds of masterminding an illegal sports betting operation from Caesars Palace completely fall apart when the prosecution’s key material was thrown out as inadmissible. 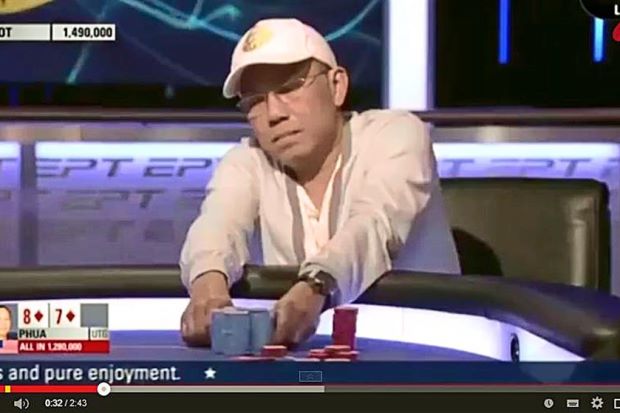 Paul Phua (seen here in 2014 at the EPT Monte Carlo) said in a recent interview that he’s not a 14K triad member or a match-fixer, just a former junket operator and investor who loves to play poker. (Image: thestar.com.my)

The prosecution’s evidence was eviscerated when an FBI undercover operation used to gather information against Phua was adjudged to have violated his Fourth Amendment Rights. All evidence against the Malaysian was tossed out by the judge, and Phua was a free man.

Now speaking out publicly for the first time about allegations by law enforcement agencies and media that have dogged him for the past two years, the bookie said in a recent interview with PokerNews that he wanted to “lay to rest” some of the allegations. Phua has been labelled many things lately, from “the world’s biggest bookie” to junket operator, to match-fixer, but the one that sticks most, perhaps, is that of 14K Triad.

He is not a triad, he says, and never has been, although he admits that you can’t be a big player in the Macau casino industry without having any contact with triads whatsoever. Phua initially made his fortune as one of Macau’s biggest junket operators, spying new opportunities in the early noughties when the region opened itself up to foreign developers.

Triads are believed to have widely infiltrated junket operations, but the evidence for Phua’s involvement in the notorious organized crime syndicate is flaky and circumstantial at best.

The source of the accusation, which was pinned on him by the FBI with his arrest at the Caesars Palace villas during the 2014 World Cup, came from a single reference in a Malaysian police report in relation to an investigation of someone else completely.

Phua now says that this was just an inference from a police report, and not even an American one at that. But he told PokerNews that the insinuations have had some fallout that is unwelcomed.

“High management people don’t want to be linked to the triads. Loans were recalled by banks and our business partners were very worried. It affects the business,” Phua said.

ESPN has called Phua the biggest bookmaker in the world, and the principal owner of the world’s largest sports book, IBCBet, which recently changed its name to MAXbet.

“I’m just an investor, I’m a gambler, and I’m a risk taker, but I’m not an operator,” he claimed in speaking with PokerNews. “I have invested in a lot of businesses, including online gambling businesses, in the past.”

An ESPN source claimed recently that Phua was the man responsible for fixing two English Premier League matches in the late nineties, an incident that came to be known as the Floodlights Affair. Two EPL matches were abandoned after the floodlights were tampered with. Several people with links to an “Asian betting syndicate” were subsequently arrested and tried.

But Phua denies that charge, saying it comes with the territory in the gaming universe, but has no basis in fact.