But none of that could compare to Event #20, $1,500 No-Limit Hold’em Millionaire Maker, which the Montreal player took down for his first ever major tournament victory. Mariz outlasted a massive field of 7,761 entries to cash out for a cool $1,221,704, and, of course, a bracelet. 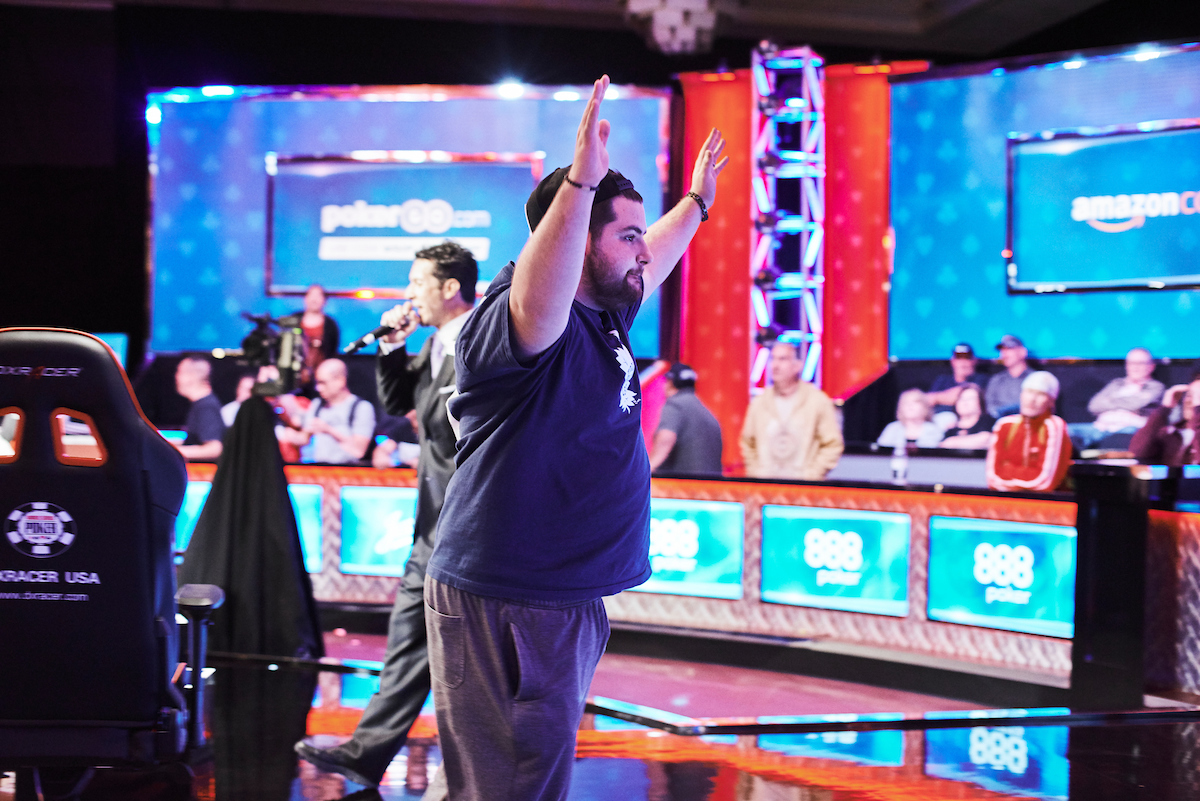 The event was the third to award at least $1 million to its winner this summer. Thomas Pomponio had already scored $1 million for winning Colossus III, and Doug Polk earned $3,686,865 in the One Drop High Roller. (Three other players also earned seven-figure payouts in the One Drop event.)

The final table video in the Millionaire Maker likely won’t make Polk’s Upswing Poker training website under the title, “How to Play Tournament Poker,” however. PokerGO announcers Norman Chad and Lon McEachern repeatedly scoffed at the play in this event, noting how most were playing “ABC poker,” betting strong hands and rarely bluffing.

But in fairness to the final table, the money at stake was life-changing. Pay jumps were massive. Each jump between 6th place and 1st place was for more than $100,000, a lot of money for players who had never played for that much money before. None of them had probably ever had their aces cracked for nearly half a million dollars either.

Heads-up play between Mariz and Dejuante Alexander lasted just 23 hands. But it should have been over sooner.

After the beat, Alexander fought back wielding his tiny stack, but in the end couldn’t overcome his formidable opponent. Alexander took home $754,499 for second place, not a bad score, but still painful.

The Utah native outlasted 615 players to win $177,985. Not only was it his first bracelet, but also his only other live tournament cash was for $720 in a 2009 Venetian Deep Stack event in Las Vegas.

Running Down a Dream

Event #23, The Marathon $2,620 No-Limit Hold’em, is down to 56 players after three days of play. There are still two days remaining.

Awaiting at the finish line for the winner is $690,469. That money would certainly help chip leader Faraz Jaka get off the streets. Actually, he doesn’t need the money. He’s already wealthy (presuming he hasn’t blown through his $5.3 million in career winnings). Yet he still doesn’t own a home, and professes to live a modest lifestyle.

Jaka declared himself a “homeless millionaire” in a 2015 piece on CNN Money, and has continued to live a nomadic lifestyle.

But with two days of play remaining, Jaka has 2,838,000 chips. Not far behind him, however, is Maurice Hawkins, who has 2,430,000 chips and plenty of experience winning tournaments. Hawkins is a 10-time WSOP Circuit ring winner, and he has hung out near the top of the leaderboard for the entire “Marathon” tournament.

We are nearing the final table in Event #25, $1,000 Pot-Limit Omaha. There are 11 players remaining. A champion will be crowned on Thursday. Igor Sharaskin holds a commanding chip lead.

Event #26, the $10,000 Razz Championship will also play down to a winner on Thursday. James Obst, one of the favorites to win WSOP Player of the Year, has the chip lead heading into Day Three out of nine remaining players. David “ODB” Baker, Brandon Shack-Harris, and Anthony Zinno all still have gold bracelet hopes.

Two three-day events got underway on Wednesday, and keeping pace, two more will kick off on Thursday.

Event #29, $2,500 No-Limit Hold’em, gets underway at 11 am PT. The prize pool is still TBD until Thursday evening at the end of the late registration period, but this event has a history of awarding first-time bracelet winners the WSOP gold.

Event #30, $10,000 HORSE Championship, contrarily, is always one of the most anticipated big buy-in tournaments, not because of monstrous payouts, but more because the field in this event always promises to be star-studded. Cards go in the air for this one at 3 pm PT.