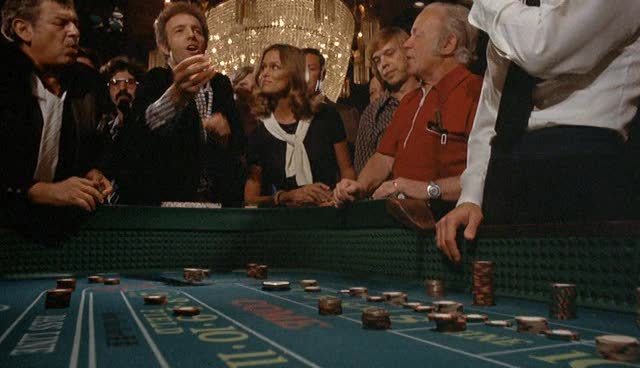 James Caan stared in a 1974 gambling movie called The Gambler and ironically may have been caught in a wiretap placing illegal bets with a New York City organized crime family. (Image: Altscreen.com)

None of the celebrities listed have been charged with any crime. Radar Online claims to have an anonymous source with inside information, but no further proof has been offered up on the allegations.

The scandal began when 13 members of the Genovese organized crime family were busted in December in a law enforcement crackdown on mob gambling, loan-sharking, and bootlegging. “Operation Shark Bait” included the arrest of career criminals, such as Salvatore “Sallie” DeMeo, a 76-year-old former bank robber.

Vincent “Vinny” Taliercio, a Brooklyn bookie, was also part of the raid and was reported to have taken many sports betting wagers from Hollywood’s elite. According to Radar’s unnamed source, Taliercio took wagers from the aforementioned celebrities. The source said investigators “probably caught some of these celebrities on the wiretaps.”

“Vinny is not just a bookie,” the source told Radar. “Everybody who is anybody in the gambling world would call him up because he’s the best handicapper in the world. He has dealt with all the big celebrities.”

Taliercio is a “walking (sports) encyclopedia,” the source added. “He was the guy crime families went to for advice.”

This past December, members of the Genovese family were arrested on suspicion of organized crime. Beyond illegal gambling, the suspects are accused of handing out loans with interest rates so high the victims often couldn’t afford to pay the loans back.

Investigators have had their eyes on the Genovese family for many years and used wiretaps to intercept conversations involving family members.

This isn’t the first time celebrities have been involved with someone charged with illegal betting. Molly Bloom was billed as a Hollywood princess who operated illegal high stakes poker games with A-listers.

Bloom was an ordinary Midwestern girl who moved to Los Angeles in hopes of doing big things. She became the host of underground high stakes cash games with high-profile movie stars such as Tobey Maguire and was living a luxurious lifestyle. Her game was eventually busted and she was arrested and sent to jail.

A book, Molly’s Game, was based on her story. Writer and producer Aaron Sorkin’s movie of the same name is in “post production,” according to IMDb, as of this writing.