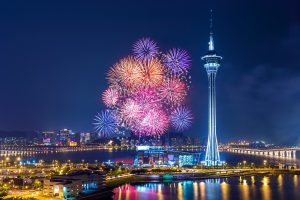 Despite enduring a tough time over the last two years due to the Chinese government’s crackdown on gambling and high stakes junkets, the offshore enclave has rallied in recent months.

Although November’s $2.4 billion gross gaming revenue is still a long way off the $4.8 billion generated in February 2014, it’s a sign the region might be on the road to recovery.

Following a general downturn in economic activity and the ban on illegal junkets (companies that would arrange for high stakes players to travel from mainland China to Macau), Macau has been suffering recently.

However, following a move by the likes of Wynn Macau Ltd to attract more families and casual gamblers, profits are on the up.

November’s official statistics from the Gaming Inspection and Coordination Bureau not only represented the fourth revenue increase in a row, but the strongest year-on-year growth since February 2014 (November 2015 saw a five-year revenue low).

According to Melco Crown’s CEO and Chairman Lawrence Ho, the region is undergoing a “natural recovery.”

In fact, with October’s visitor numbers reaching 2.7 million, the gambling region is also starting to welcome back high rollers.

With the Chinese government preparing to impose a 10 percent tax on luxury cars in a bid to reduce emissions, high rollers are now looking for other places to invest their cash.

VIPs and Novices Bringing in the Money

HSBC Holdings Plc. analyst recently told Bloomberg that there has been a “genuine and sustained” demand for VIP rooms in Macau over the last two months. With high rollers once again returning to Macau, the region could now be making money on two fronts.

In that past, Macau’s profits were almost exclusively driven by VIP players. Today, however, there’s a much greater stream of revenue coming from novices.

In fact, this change of tact is one that’s been mirrored in the online poker industry. As high roller action has dried up, major operators such as PokerStars and 888poker have been forced to attract new demographics.

Through a combination of casino gaming options, entertainment-based media campaigns and poker variants with an emphasis on luck, poker sites have managed to bring fresh blood into the game.

Macau has clearly realized that a top-heavy system that relies on high rollers isn’t sustainable and followed the direction of the online poker world.

Of course, even though the region is now starting to show signs of a recovery, there’s still a long way to go before it reaches its previous strength.