Luke Bohnen is proof that taking a break from poker can sometimes be the best way to improve your game.

After taking a three-year break from poker, the Minnesotan decided to get back in the game as 2016 wrapped up. Two months later, he’s shipped a major title and the biggest score of his career. It was about as good a comeback as the  27-year-old Bohnen could have hoped for this past weekend. 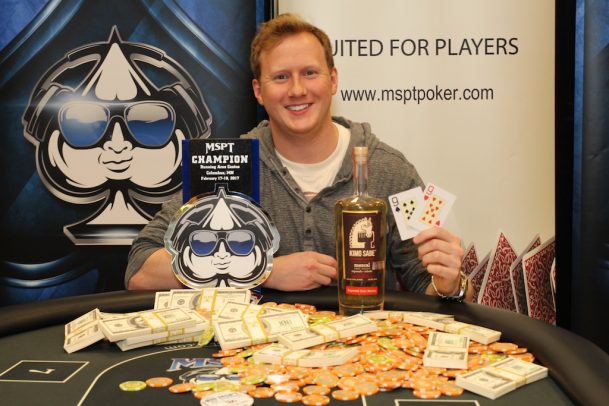 Luke Bohnen kicked off three years of rust to win the MSPT Running Aces for the largest score of his career. (Image: MSPT)

The controls engineer from Blaine, Minnesota topped a field of 358 entrants to win the Mid-States Poker Tour (MSPT) Running Aces Main Event for $86,440.

Nice Work If You Can Get It

From 2012-13, poker was all Bohnen did. He had some small results, but nothing over four figures. And then his dad told him that he needed to get a real job.

“I sort of faded from poker,” Bohnen told MSPT officials after the win. “Last Christmas, I decided to starting playing again and had a lot of luck right out of the gate. This is my biggest win by far, but it’s still back to work tomorrow.”

Bohnen chalked his win up to “a lot of luck” and “getting good cards,” but that wasn’t exactly the case. He finished as the Day 1B chip leader, steadily chipped up on Day 2, and went wire-to-wire at the final table, where he defeated accomplished pro Rob Wazwaz, who was at his seventh MSPT final table, during heads-up play.

Bohnen took a near 5:1 chip lead into heads-up play against Wazwaz, who finished 17th in December’s WPT Five Diamond Main Event. In the final hand of the tournament, Wazwaz flopped an open-ended straight draw with nine-seven and got it in against Bohnen’s pocket nines. The straight never got there, and Wazwaz had to settle for runner-up and a $51,864 consolation prize.

“I’ll do my best to not be super responsible,” Bohnen said when asked what he’ll do with the money. “I’ll get something fun at least.”

By cashing, Kirby and Dresch, the latter of whom won the Running Aces last fall, notched their first cashes of Season 8, which meant their streak of cashing every season of the MSPT continues. Kou Vang, Dan “DQ” Hendrickson, and Joe Matheson all have a chance to equal the feat, but they’ll need to cash sometime this season to keep their streak alive.

Season 8 of the MSPT continues this coming weekend with a $350 Regional Event at Tropicana Evansville in Southern Indiana. The next MSPT Main Event, which will be the tour’s 100th, will take place March 24-26 at Meskwaki Casino in Tama, Iowa.