Los Angeles poker rooms are now operating at maximum capacity for the first time since COVID-19. But some of the player perks, such as tableside cocktail service, haven’t yet returned. 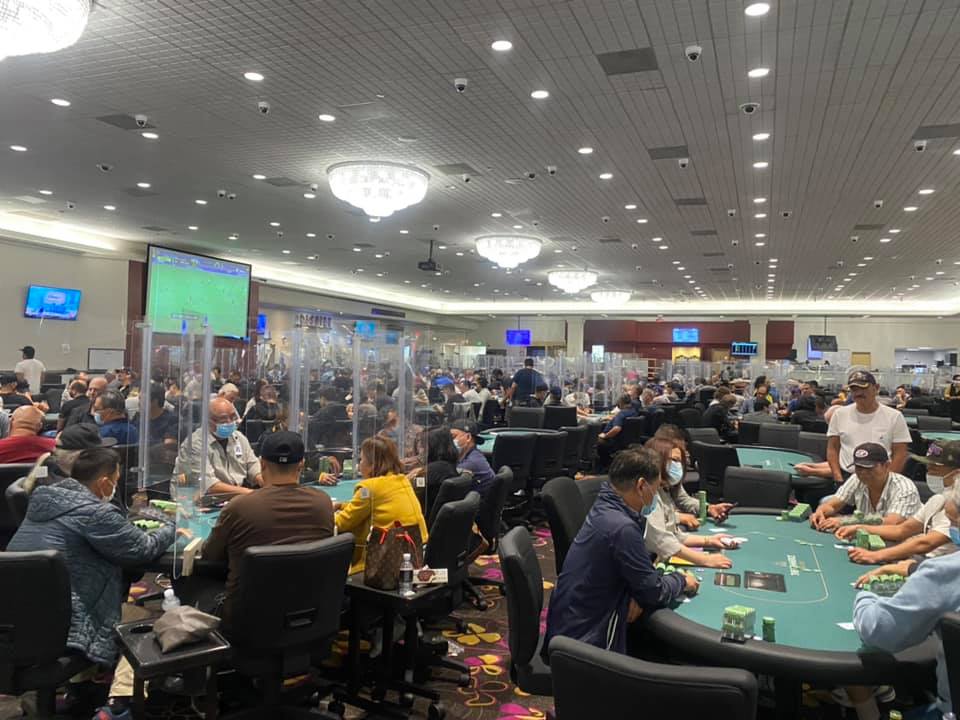 On June 15, California Governor Gavin Newsom finally gave businesses in the Golden State permission to fully reopen. Masks are no longer required anywhere in the state for those who are fully vaccinated, but individual businesses are allowed to set their own rules.

In the six Los Angeles poker rooms, mask-wearing is still far more prevalent than in Las Vegas, where only a tiny fraction of poker players, dealers, and casino patrons are still masked up. But despite Newsom permitting businesses to return to normalcy, casinos are still requiring staff to wear face coverings. For now.

All dealers, cashiers, security guards, and floor managers wore masks on Thursday and Friday at Commerce Casino and at Bicycle Casino, two of the largest poker rooms in the world. CardsChat News asked a shift manager at The Bike when he expected the masks to come off staff members, and he said likely this weekend. He also informed us that the mask policy was a company mandate, not a requirement from the state.

The Bicycle Casino doesn’t require customers to wear masks, but if you aren’t wearing one, the security guard will ask you if you’re vaccinated upon entry. However, they won’t require you to show proof of vaccination. Security guards at Commerce don’t ask the uncomfortable question. About 20% of poker players in these Los Angeles rooms — just an estimation — continue to wear face coverings. That’s about five times higher than in Las Vegas casinos.

If you’re planning to visit one of the six Los Angeles poker rooms in the near future, you may be disappointed that a few perks are still missing. Most notably, none of the casinos are currently comping players, so if you hand the dealer your players card upon sitting down at the table, there really isn’t a point to it.

The Bicycle Casino will soon bring back the player comps, although no specific date for that has been set. Over at Commerce, the wait for a return to comping might be longer. Multiple casino regulars informed CardsChat News they’ve been told by staff members the comps won’t return until 2022.

Hollywood Park and Commerce began limiting comps pre-pandemic as a means of cutting back on expenses. Player comps at the Los Angeles poker rooms have been temporarily eliminated for that very reason. The pandemic was costly to the casinos, so they’ve been forced to cut back even further on the freebies, according to multiple Commerce dealers.

When you arrive to play, you’ll also notice the absence of cocktail service. Players can bring drinks from the bar back to the table, but there isn’t any tableside service available at any of the local card rooms. The reason for that is the state didn’t give the casinos a heads-up on the restrictions they’d still be required to enforce until June 15, the day the California fully reopened. As such, they weren’t ready to call the cocktail servers back to work right off the bat. But the tableside drink service is expected to return soon.

The poker rooms also still won’t allow players to bring food back to the table. Some players in a $5/$5 game on Thursday evening complained to staff members. They were told they’d have to get up to get food and eat away from the table. Despite the lack of players chomping down on greasy burgers and fries at the table, the chips at Commerce were still just as sticky as ever.

California’s full reopening didn’t do much to further pack the Los Angeles poker rooms. According to the Friday morning shift manager at The Bike, business hasn’t picked up much, if at all, since June 15. The Bicycle Casino, the largest poker room in the world with 185 poker tables, is always busy, even during the pandemic.

The same can be said for Commerce and Gardens Casino, both of which had more than 50 cash games running Friday evening — similar numbers to what they’ve seen over the past month. Cash game tables are all eight-handed, except for certain mixed games.

The plexiglass dividers are also beginning to disappear, but some still remain. At Commerce and The Bike, more than half the tables were bare for the first time since COVID-19, and employees were busy removing some other partitions Friday morning.

California’s reopening hasn’t changed much for the poker rooms, yet. Other than vaccinated players no longer being required to wear face masks and many of the plexiglass dividers being removed, the experience isn’t any different than it’s been since the rooms were permitted to move back indoors in May.

Unbelievable that the LA card rooms are whining about Covid expense cutting profits so they need to suspend the MEASLY comps they give.
Ridiculous….the rake and promotion drop ( READ EXTRA RAKE AND PROFIT ) makes it near impossible to beat the game !
Players need to vote with their feet and stay away !