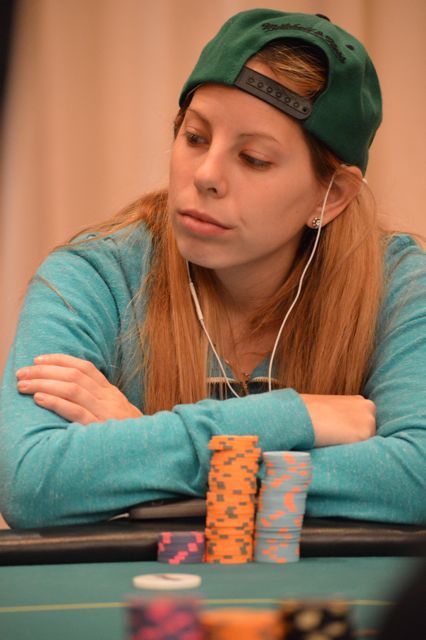 Loni Harwood came into the final table of the 2015 World Series of Poker National Championship on Saturday with a commanding chip lead, and held on to that advantage for most of the final table before walking away with the title and her second career WSOP bracelet.

Harwood is no stranger to WSOP success. In 2013, she cashed six times at the World Series, including winning a $1,500 No Limit Hold’em tournament. Harwood has also won two WSOP Circuit rings, with both of those wins coming in 2012.

Claiming this title was no easy task, as Harwood had to face a very strong field throughout the tournament. The WSOP National Championship featured 100 players who qualified thanks to their WSOP Circuit results over the past year, as well as 22 top WSOP performers who paid $10,000 each to join the event (including Harwood herself).

That meant it was only natural to find a host of talented tournament pros at the final table. The biggest name of all was that of Daniel Negreanu, who came into the final day of play third in chips out of the seven remaining players.

But the six-time WSOP bracelet winner was eliminated fairly quickly. After Paul Mattioda was knocked out in seventh place, Negreanu found himself in a coin flip against Masek, holding pocket jacks against Masek’s AQ suited. Unfortunately for the Canadian legend, a jack on the river not only made him a set, but also improved Masek to a straight, ending his run in sixth place.

After Vincent Moscati and Brad St. Vincent were eliminated in fifth and fourth places respectively, that left Harwood, Masek, and Darryll Fish to battle for the title. Fish got his money all-in preflop with KJ suited, but that was well behind the AJ of Masek. When no help came on the board, Masek had not only eliminated Fish in 3rd place, but also taken a slight chip lead over Harwood going into heads-up play.

But that advantage only lasted for a few hands. Harwood quickly took the lead and then grinded Masek down over the course of over an hour and a half, eventually holding a nearly 5-1 chip lead heading into the final hand.

On the decisive hand, Harwood moved all-in from the button and Masek called with A7. Harwood’s pocket threes were slightly ahead, and her advantage only grew when another three hit on the flop. Masek picked up a flush draw on the turn, but the river was a blank, ending the tournament and giving Harwood the title.

For sixth place finisher Daniel Negreanu, the money he took home, $63,647, wasn’t exactly life-changing. After all, he does have over $30 million in career earnings. But it was yet another excellent result in a summer that has been full of them for Kid Poker, both on and off the poker table.

After busting, Negreanu headed up to Toronto for a wild PokerStars party at the RealSports bar in Toronto. He also talked to the Toronto Sun about the prospects of bringing an NHL team to Las Vegas, a move he has been strongly supportive of in recent months.

“I just don’t see it not happening,” Negreanu told the paper, putting the odds of an expansion hockey franchise landing there at 99.9 percent. “We have a solid owner, an arena, and we sold 13,000 season tickets.”

Negreanu plans to buy a small stake in the team if the franchise is awarded to the city, while billionaire Bill Foley will be the majority owner.

“The idea of owning a piece of an NHL team is the coolest thing ever,” Negreanu said.

It seems good to start at the bottom with the truth did I would get this far , though some say it’s luck seems to me that the game is very strategic and concentration and tranquility needed to play and interpret well each hand